Look out! Just in time for Halloween, Colonial Radio Theatre's production of SOMETHING WICKED THIS WAY COMES is just about to be released!

It's available to pre-order from Blackstone, here, and should be available from other sources such as Amazon and Borders fairly soon. The official release date is 1st October.

Colonial very kindly supplied me with a review copy, and I can report that this is a rollercoaster of a production, and a worthy successor to their previous release, the award-winning Dandelion Wine. The script is by Bradbury himself - it is essentially his stage play version of SWTWC, ever so slightly modified for radio/audio.

Unlike Dandelion Wine, the SWTWC play is a direct adaptation of the novel, but with many of the introspective chapters (revealing characters' inner thoughts) eliminated. This means the story rolls by at a slick pace. I think those of you who use SWTWC in the classroom will find the audio production to be a useful study aid.

I hope to post a detailed review of the production soon, but for now I'll just say that I found the music and post-production to be lavish, if at times overpowering. The performances are a mixed bag, but Mr Dark and Mr Halloway come across well. The production perhaps lacks some of the intimacy of the later parts of Dandelion Wine, and Bradbury's removal of introspection - desirable for stage, but arguably not so desirable for radio - makes for a less rounded narrative. But this may be outweighed by the gain in pace, which the Colonial team have made the most of.

Colonial have also announced that they are working on another Bradbury piece: The Halloween Tree.

My thanks to Jerry Robbins of Colonial (who plays Mr Halloway, by the way) for the information and sneak preview of the CD cover art.
Posted by Phil at 9:06 pm No comments: 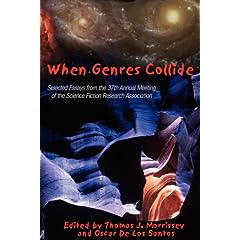 Publishing is quite a slow business. It's over a year since I presented a paper about Bradbury's Leviathan '99 at the Science Fiction Research Association conference in New York... but the book of the conference has only just come out.

When Genres Collide: Selected essays from the 37th annual meeting of the Science Fiction Research Association, edited by Tom Morrissey and Oscar De Los Santos, includes a diverse array of papers on various aspects of science fiction. My paper appears in a section alongside papers on Philip K. Dick and Norman Spinrad. Other delights include Lincoln Geraghty on 1980s Hollywood science fiction, and Adam Frisch on the Byronic hero in science fiction.

The book is now available from Amazon (direct link here) and other fine bookstores.
Posted by Phil at 7:46 pm No comments: