I have always maintained that audio media are best suited to Ray Bradbury's work. Because he works with such strong images, the visual media seem doomed to create nothing but pale imitations of his finest prose. But radio and audiobooks still leave the listener to create images in the mind. Plus, a lot of Bradbury's sentence constructions seem to have a definite rhythm, which makes them seem as if they are written to be read alound.

The above paragraph was really just an excuse to introduce a couple of sound-related weblinks:


I should also mention that today is Ray Bradbury's birthday - he is eighty-eight years old today!
Posted by Phil at 9:05 am No comments: 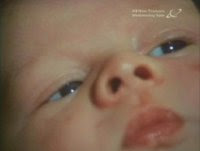 Although I posted a page for the Chris Charles version of The Small Assassin over a year ago, I have only now got round to writing a review - click here to read it.
Posted by Phil at 11:27 am No comments:

The Story of a Writer

One of the most frequently asked questions on the official Ray Bradbury Message Board is about a strange short film from the early 1960s in which a telephone line gains a life of its own. People who enquire about the story usually have a dim memory of this being a black and white film (and often report that the film scared the life out of them when they were little).

The mysterious film is actually a film-within-a-film. It is a dramatisation of "Dial Double Zero", and features in a short documentary about Ray Bradbury, The Story of a Writer. Produced by David L. Wolper and directed by Terry Sanders, the documentary shows Bradbury's approach to writing. We see him at his typewriter, giving a lecture, researching, cycling around the Venice, California canals, and reading his story to a writers' group.

For many years, this film was hard to get hold of. Then it was released on VHS and DVD by the American Film Foundation. And now, it's available to view and download - for free - from Archive.org.
Posted by Phil at 2:12 pm No comments:

Farewell Summer and other news

So it took me two years to get round to reading Bradbury's 2006 release Farewell Summer. Partly because I had a whole load of other stuff to do, but if truth be told it was also partly because I feared it would be one of his lesser works. It is, after all, the left-over portion of Dandelion Wine, the part the original publisher didn't want.

In fact, I found the book a brisk read, with some interesting elements, but not exactly a classic. Click here to read my review. Further to my recent post about tidying up my Short Story Finder, I have another item to remove from the Finder. One of the mystery items in there has always been "Affluence of Despair". Someone, somewhere, must once have caused me to think "Affluence" was a short story. Indeed, it was once anthologised in a SFWA Grand Masters book edited by Frederik Pohl - a book I have never laid hands (or eyes) on.

However, friend Eric has seen this book, and he has confirmed that "Affluence of Despair" is not a short story. It is, in fact, an essay. The very same essay is to be found in Bradbury's essay collection Bradbury Speaks.

I have also updated the links to the magazine covers in the Short Story Finder. These point to external websites, in some cases to commercial sites that sell back issues. All the Playboy cover links are now fixed, and I have added cover links for Dime Mystery and The Saturday Evening Post. CAUTION: Those of a delicate disposition should avoid clicking on the Playboy links, as the external site I link to carries random ads of an adult nature. You have been warned! The Nebula-winning author Sheila Finch (pictured) has just posted a guest blog at the Nebula Awards site where she compares Bradbury's Dandelion Wine to Dylan Thomas's Under Milk Wood. It's a short article, but gets right to the heart of how Bradbury's prose works.
Posted by Phil at 10:11 am No comments:

The companion chapbook, The Dragon Who Ate His Tail, also now has its own page, here.
Posted by Phil at 9:56 am No comments: