The One That Got Away

It's common knowledge (or received wisdom) that for every film that gets made, the are 5000 screenplays that get left on a shelf; some because they are awful, but a goodly proportion for no particular reason other than being the wrong script at the wrong time.

Even a writer with an established reputation - Ray Bradbury, to pick an example at random! - can suffer this same fate. Although Bradbury has more than a handful of credits on completed feature films (Moby Dick, Something Wicked This Way Comes to name but two), he has his name on a large number of unfilmed scripts. Some of these have begun to appear in print in limited edition volumes from Gauntlet and Subterranean.

I have recently been studying Bradbury's unfilmed screenplays for The Martian Chronicles. Two of these have been published in the so-called The Martian Chronicles: the Complete Edition - these are a script from c.1965 which was written for Alan J. Pakula and Robert Mulligan, and a script from 1997 which was written for Paramount. The Complete Edition won't give you any of these details. Nor will it tell you that Bradbury wrote at least two other script version of The Martian Chronicles. Far from being "complete", that volume gives merely an (unexplained) glimpse at a substantial amount of script work Bradbury carried out between approximately 1958 and 1997.

I will be presenting a paper on these unpublished and unfilmed screenplays at a conference in a couple of weeks. The conference theme is the "invisible" nature of the screenplay, and my paper is titled "I Live By The Invisible: the Published and Unpublished Screenplays of Ray Bradbury". You can find my abstract on the conference website.

Back in 1963, we had barely left the confines of Earth. The Mercury program was underway, and a few Moon probes had been flung toward our natural satellite. With the developing space age, the media were beginning to pick out certain figures from the science fiction field who appeared to have some expertise in envisaging the future.

Somewhat oddly, given his lack of interest in technical and hardware matters, Ray Bradbury became one of the leading representatives of the SF community in media coverage of the Mercury-Gemini-Apollo programmes. Another, more logical choice for such a role was Bradbury's friend Arthur C. Clarke: not only an SF writer, but something of a scientist and "inventor" of the geostationary communication satellite.

Which brings me to a fascinating piece of television history: a recently re-discovered (previously considered lost)  episode of the BBC's astronomy series The Sky at Night. Although usually broadcast only once a month, the series claims to be the longest continuously running TV show in history - and is still presented to this day by its original host, Patrick Moore (himself a science fiction writer, as well as an astronomer). What's interesting in this episode is the guest: Arthur C.Clarke. Clarke talks about all manner of proposals for bases on the Moon and Mars. It all sounds so logical, obvious, and inarguable... and yet most of what Clarke predicts did not come to pass. Because we got bored with the Moon shortly after Apollo 11!

There's a lot of Bradbury audio material freely available out there, especially radio drama adaptations from the 1950s. Many of these are of a dubious copyright status: series such as Dimension X are generally regarded as being in the public domain in the US simply because of their age and lack of copyright renewal at the appropriate time; but in most cases the underlying Bradbury short story is still in copyright and will remain so for many years.

My own audio listings give details on all the known productions, and in some cases I have provided links to Archive.org and other places where the shows can be heard. However, I'm not too diligent lately in keeping these links up to date, so don't be surprised if some of these are broken.

Another convenient resource is this little collection of embedded links from Sci-Fi-London. If you have nothing better to do this festive season, why not just click, sit back, and listen.

Email ThisBlogThis!Share to TwitterShare to FacebookShare to Pinterest
Labels: audio, Dimension X, radio, X Minus One

Ray Bradbury's work is used in all sorts of classrooms, particularly in the US. Fahrenheit 451  is frequently adopted for Big Read programmes, and adaptations of his works (especially the short film All Summer in a Day and the graphic novel of F451) have extended his popularity.

Boston University recently published an account - in their One Day, One Class series - of how one lecturer uses the short story "I Sing the Body Electric" to illuminate ideas about robotics. Read about Joelle Renstrom's class here.
Posted by Phil at 8:00 am No comments:

Email ThisBlogThis!Share to TwitterShare to FacebookShare to Pinterest
Labels: education, I Sing The Body Electric, teaching 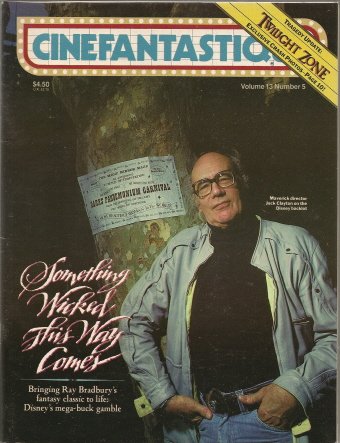 Although I systematically scour the web for Bradbury related material, some items slip under the radar. For instance, I just discovered a podcast from 2010 reporting on Bradbury's 90th birthday party and Ray Bradbury Week. It comes from the Cinefantastique Post-Mortem series, and features Lawrence French talking about Bradbury, the celebrations, Rachel Bloom, Fahrenheit 451 and William F. Nolan.

And from around the same time comes this terrific report by Betsy Lee on a celebration screening of The Wonderful Ice Cream Suit.
Posted by Phil at 8:00 am No comments:

The Wonder Of It All

There's an excellent blog out there called Thrilling Wonder Stories. In September it carried a review of Bradbury's "Kaleidoscope", as adapted for the 1950s radio series Dimension X by George Lefferts. It also includes the episode for you to listen to.

In many ways, "Kaleidoscope" is an ideal piece for radio drama, as its impact can be carried largely through the use of voice and the odd sound effect. The story involves astronauts who become physically isolated from other, and the sense of isolation can work well on radio... which is perhaps why "Kaleidoscope" has been adaptedly repeatedly for the medium. Check out my log of Bradbury radio adaptations and see how often it appears.

You may have seen the recent flap about Ray Bradbury finally authorising e-book editions of his work - apparently starting with the delightfully ironic Kindle edition of Fahrenheit 451. Here's The Guardian's report.

Many of the reports focus on the theme of F451 as being the dangers of destroying books... but overlook the key lesson of F451, which is that it's the TEXT that matters, not the physical form of the book. This, after all, is why the book people memorise the texts.

While we're thinking of Bradbury moving into the modern era, it's nice to be reminded of the mechanical means he used to create most of his works: this story shows one of Bradbury's old typewriters.

And if you think Bradbury is able to conjure up amazing images at his typewriter, just see what this other creative typist can do!

At some point in his career, Bradbury switched from manual typewriters to electric ones, although he continued to use manual portables when travelling. Some of his early '60s electric typing can be seen in the "symbolism survey" that swept across the blogosphere this last week: this article in The Paris Review tells of a series of responses a sixteen-year-old high school student received in 1963 when he wrote to famous writers. Some, such as those from Kerouac and Rand, take issue with the questions or the assumptions behind the questionnaire. Others, such as Ralph Ellison and Bradbury, take a more helpful and thoughtful line.
Posted by Phil at 8:00 am No comments:

If you happen to be in Bradbury's home town of Waukegan, Illinois, now would be a good time to get down to your local museum. The Waukegan History Museum has an Open House on Saturday, offering a chance to view an exhibit called “Ray Bradbury: Waukegan’s Influence On A Visionary”. The exhbit runs until 22 December. More details can be found here.

And if you want to travel a bit further from home, why not consider what Mars has to offer. This selection of books from the Washington Post provides suggested reading about the red planet in fiction and fact. Top of the list? The Martian Chronicles, of course.
Posted by Phil at 8:00 am No comments:

I've been away from the blog for a while due to pressure of work, but I felt compelled to do an update on the reviews for Jon Eller's excellent book Becoming Ray Bradbury.

The book came out in the summer, and has been gathering positive reviews both in literary circles and in the popular press. One of the most interesting reviews is actually quite an insightful article about Bradbury, using Becoming Ray Bradbury as a springboard: it's Jamey Dunn's article for Illinois Issues, published by the University of Illinois.

The British Times Literary Supplement published a review by noted fantasy critic Roz Kaveney,  who writes "Eller's excellent account makes clear that one of the reasons why Bradbury came to seem an important new voice is that he was never as naive a writer as literary patrons such as Christopher Isherwood and Aldous Huxley may have assumed." (This review is only viewable online if you have a paid subscription, so I am unable to provide a meaningful web link.)

Other reviews include my own here,  and these others: The Washington Post, Shelf Awareness, Barnes & Noble.
Posted by Phil at 8:48 pm No comments: