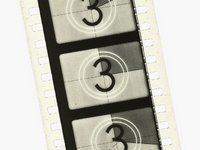 I thought I knew about all of these shorts, but new information keeps turning up. I recently had my attention drawn to The Flying Machine, a 16-minute short starring Blade Runner's James Hong (left), and Diane Haak's 1979 version of The Veldt (24-minutes). I haven't seen either of these, and have very little information on them. I hope to see them one day, and would welcome hearing from anyone who knows more about them.
Posted by Phil at 8:41 pm

i was the little girl in this film, and i'm dying to get ahold of a copy...

I assume you are referring to "The Veldt" (it's the only one of the stories with a little girl in it, as far as I recall).

I'm afraid I've never seen this version of "The Veldt", and would like to get hold of a copy myself! I will get in touch with my best Bradbury contacts and see if anyone knows about it.

This is probably the only educational film that I remember from grade school. I have been trying to see if you can purchase it, but no luck. If you find it, I'd love to have a copy also. I remember it starred a young Jason Bateman. The memory of this film has made me seek out Bradbury to read in my adulthood.

Hi Julie, it's a while since I made that blog post, and I still haven't been able to track down copies of these films. I am ever hopeful, however!

Not sure if this blog is still active but I have a copy of 'The Veldt'. It is copyrighted 1982, but could have been made in 1979. It is a Barr Film Production and features Jason Bateman(none of the actors are credited).
The film stock is lpp and is still in excellent shape, with no splices, clean vibrant color. 113 pictures of this precise film can be seen at my google picasa account:
https://picasaweb.google.com/jonny8books/16mmFilmTheVeldtRayBradbury?authuser=0&feat=directlink
If you have any questions about the film, or you want to purchase the film my email is jonny8books@gmail.com