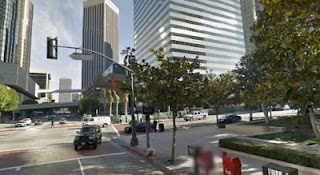 The dedication of Ray Bradbury Square has been confirmed for Thursday 6th December at 2pm, and a list of speakers has been published.

Ray Bradbury Square is in Los Angeles, located at the intersection of Fifth St and Flower St. This very urban crossroads doesn't look like the sort of place Bradbury would identify with, but to one side of the  intersection is a small park adjacent to the Los Angeles Public Library. It is in this park that the dedicatory sign will be mounted... and now it all begins to make sense, since Bradbury is strongly identified with libraries.

The speakers at the dedication ceremony will include the actor Joe Mantegna, whose credits include the Bradbury-scripted The Wonderful Ice Cream Suit. Others of note include the City's Librarian, John Szabo; the SF writer David Brin; Bradbury's daughter Sue Bradbury Nixon; Bradbury's biographer Sam Weller; and the co-ordinator of Ray Bradbury Week 2010, Steven Paul Leiva.

The event is open to the public. For more information, click on the flyer below.

Bradbury, the Midwest and ROSEBUD

Further to my recent post about Rosebud magazine, editor and publisher Rod Clarke has told me a bit more about his background and motivations for starting the magazine, now approaching its twentieth year in print. I was aware of his (and Rosebud's) Wisconsin connection, but I had not worked out how this might connect to Bradbury. This is what Rod tells me:

Having grown up in a small village in the American Midwest, I have always identified with Mr. Bradbury’s work, especially the stories with “October themes,” since I am an October baby, having just turned 65 on October 16th, and I have always been enchanted by the wonderful autumn colors of the Midwest. My wife and I live on 20 acres of rural land in southeast Wisconsin in a 140-year-old farmhouse I heat with wood I cut myself.

I worked for August Derleth’s literary publishing house Stanton & Lee in the eighties, but I never met the man. However his influence, and the inspiration he drew from the Wisconsin land have always stuck with me; in particular the wonderful balance he struck in his work between the natural and the supernatural, fact and fantasy. Derleth, as you know, provided publishing outlets for fantasy, sci-fi and horror writers old and young, including many greats of the Weird Tales crowd, Lovecraft, Clark Ashton Smith, Bloch, and many more. I would like to think that Rosebud follows Derleth and Bradbury’s independent imaginative literary tradition in the American Midwest .

Rosebud will celebrate its twentieth year of operation as an independent, self-financed literary magazine in the autumn of 2013.

My researches have recently turned back towards Ray Bradbury's work on Moby Dick (John Huston, 1956) and - perhaps more importantly - the influence this experience had on his own later creations such as Leviathan '99, Something Wicked This Way Comes and Green Shadows, White Whale.

After watching the Huston movie again, I started casting around for behind-the-scenes information on the film, and stumbled on a fascinating post on a blog called Matte Shot: a Tribute to Golden Era Special Effects. It includes some rare images of the whale and boat miniatures used in the film, and some informed speculation on the craftsmen who brought the film's effects work to the screen. Read all about it here.

My own review of the film is here - although it really needs updating, since Bradbury's version of the screenplay has since been published, and shows that the vast majority of the film sticks to Bradbury's script, although the final act shows some small but significant deviations from it, especially in the behaviour and implied motivations of Starbuck.
Posted by Phil at 8:00 am 1 comment:

An art gallery in Ray Bradbury's old home town of Venice, California, is currently staging an exhibition of works related to Bradbury. In fact, L&M Gallery is located on the exact spot where Bradbury lived in the 1940s, and where he wrote some of his early works in including much of The Martian Chronicles. The exhibition runs until January 2013. Here's some more detail from the Gallery's press release:

Curated by Yael Lipschutz in honor of Bradbury and his journey into the red unknown, the exhibition will include the original manuscript of The Martian Chronicles, alongside artists ranging from Yves Klein—whose mysterious blue sponge sculpture from 1958 is as strange and disconcerting as any Mars rock—to Larry Bell, Jonah Freeman & Justin Lowe, Matthew Ritchie, and Vija Celmins, whose exquisite renderings of the cosmos serve to propel the viewer forward through space as we travel with Bradbury on his interstellar mission. Some works directly invoke the Red Planet, such as Ed Ruscha’s Hold on For a Minute, I’m No Martian (1980), and Tom Sachs’ Phonkey (2012), a large-scale sculptural tableau, in which a lone radio sits silent, stranded atop a scorching Martian terrain.

Cordella (1988-1992), an ethereal blue resin and fiberglass plank by the late John McCracken, (1934-2011) more abstractly suggests Bradbury and the perceptual doors of the mind he opened with his literature. Mars represented not only a stage upon which the writer projected our dreams and fears as a society, but another dimension of thought. Today, as exploration of the fourth planet from the Sun continues, we revisit this philosophic arena.


For more information on the exhibition, visit the L & M Arts website.
Posted by Phil at 8:00 am No comments:

The marvellous bare.bones website has published another of Jack Seabrook's insightful reviews of The Alfred Hitchcock Hour. This latest instalment is a detailed breakdown of the episode "The Life Word of Juan Diaz", which was scripted by Bradbury and based on his own short story. You can read Jack's review here. (My own review of the same episode is on my Alfred Hitchcock Hour page, here.)

Jack's other reviews of Bradbury/Hitchcock episodes are all worth reading. There are collected here.
Posted by Phil at 8:00 am 1 comment:

Here's an unusual little item, a supposedly "lost" interview with Ray Bradbury. I say "lost" because it seems absurd to suggest that Bradbury - one of the most widely interviewed and media-friendly writers of his generation - could possibly have done an interview that contained anything so unique that its loss would be significant. There are whole BOOKS of interviews with Bradbury out there, and he was profiled for interview-based documentaries at least four times across his career.

Anyway, reservations about the title apart, The Lost Interview of Ray Bradbury does give us a nice glimpse of Ray and his thoughts from about twenty years ago. At this point he was in his early 70s, a time when most people would have long since retired, but not our Ray. Instead, he was writing scripts for his long-running TV series, putting together the short story collection Quicker Than The Eye, and launching his novel Green Shadows, White Whale. I think this is what they call a third act... The film ends with Ray reading his poem "Doing is Being", which alone makes it worth watching.

The Lost Interview of Ray Bradbury - twenty-year-old footage blended with stock footage and (in my view) rather unnecessary visual enhancements - is directed by Harry Hall, and can be viewed in three episodes on Vimeo:

Meanwhile, the Ventura County Star reports that Michael O'Kelly's documentary about Bradbury - Live Forever: the Ray Bradbury Odyssey - has been screened, and that O'Kelly is now looking for a distribution deal to get the film released to TV and/or DVD. The report recaps much of the story of the making of the film during the last three years or so of Bradbury's life, and also recaps the highlights of Bradbury's life and career. The report is here.

As the days, weeks, months go flying by I somehow managed to miss blogging anything about Bradbury on Halloween. If there is one month of the year that is Bradbury's, it is undoubtedly October: the month that figures centrally in at least three of his books:

Fortunately, others kept Bradbury visible this Halloween. For example...

Bradburymedia's friend Brian Sibley reminded us once again how a blog post should be done, with his excellent account not only of the creation of Bradbury's Halloween Tree, but of his friendship with the late author, and of the spreading tradition of the Halloween Tree concept. You can read Brian's post here.

Radio Station KPFK re-broadcast an archive programme which includes a performed reading of The Halloween Tree - including Ray Bradbury himself as one of the readers. This show is currently available in the stations online archive, but I expect it will only be there for a short while, as don't think they archive everything forever. So, listen while you can, but make sure you allow yourself a full three hours. Here's the direct download link.
Posted by Phil at 9:19 pm No comments:

Bradburymedia has been rather quiet of late. There's no big explanation for this, other than my general state of busy-ness... partly connected to my resolution to complete a cover-to-cover reading of Moby Dick in two weeks or less.

Of course, when John Huston invited Ray Bradbury to write a screenplay for Moby Dick in the 1950s, Bradbury replied "But I've never been able to finish the damned thing." Me neither, until now.

A new issue of Rosebud magazine is now available, issue 53. This is "the magazine for people who enjoy good writing", and which has in the past included a fair amount of Bradbury-related material:

All issues are still available for purchase from the Rosebud online store - most for $6.95, but issue 34 with its uncollected Bradbury story will set you back a cool $100.

There's no Bradbury in issue 53, but I understand from editor Rod Clarke that there will be something about Bradbury in the next issue. More details to follow.

(My thanks to Eric Carter for pulling the information together on Bradbury appearances in Rosebud back issues.)