More Bradbury sightings on the web...

Tobias Anderson's one-man Bradbury show The Illustrated Bradbury has just received a rave review from The American Chronicle. Mr Bradbury was in attendance on the same day as the Chronicle's reviewer, prompting this observation:

One touching moment in the presentation was during "The Foghorn." Tobias Andersen, in the persona of the lighthouse keeper, was commenting on the cry of the mysterious beast from the sea and the plaintiff foghorn, when I heard a loud sigh from the audience. Mr. Bradbury was in attendance and he was reacting to the sound of his own words being delivered with such passion from the stage. It was beautiful.

When was the last time you awarded a book three Ws? That's the rating The Weekender has given to Bradbury's recent book Summer Morning, Summer Night. This review is perhaps a little confused (or confusing), referring to the book as both a novel and short story collection, and omits to mention that it is a collection of off-cuts and therefore likely to appear highly disjointed to the read who is unaware of the text's history. It is, of course, the volume of material that didn't make it into either Dandelion Wine or its sequel Farewell Summer.

Blogger Celtic Lady has posted about real dandelion wine, and gets us in the mood by quoting evocative passages from Bradbury's book.
Posted by Phil at 3:51 pm No comments:

The Lake County Sun-Times, based in Chicago, has a few items of interest to the Bradbury fan. On 18th February Ted Gioia posted this appreciation of The Illustrated Man. And on 23rd February came this scrapbookish history of Bradbury's hometown of Waukegan... and this strangely unexplained tiny article about Mr B.

Urban Archipelago's film of Ray Bradbury's Chrysalis is now out on the festival circuit. This, you may recall, is the feature film debut of the folks who brought us the short film of A Piece of Wood. The official website of Chrysalis is here, and its MySpace page carries details of forthcoming screenings. I haven't seen the film yet, and I haven't seen many reviews. One visitor to the Boston Sci-Fi Film Marathon has posted this less than positive review.
Posted by Phil at 10:13 pm No comments: 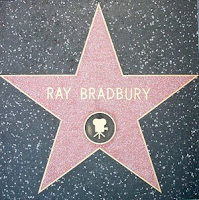 I never thought it would happen, but Ray Bradbury, nearly twice my age, is moving too fast for me to keep up with. I have two of his recent books in my "to read" pile, and he already has another two out. And another two scheduled for release. Not to mention the three stage plays already stacking up in California...

The two books already out - and not yet showing up elsewhere on my website - are Masks and We'll Always Have Paris.

Masks is an unfinished novel, originally written in the 1950s. It would have been Bradbury's second novel, after The Martian Chronicles. Gauntlet Press have now released the text for the first time, restored from various drafts and fragments located by Bradbury's bibliographer Donn Albright. From this description, you may gather that this isn't an ideal book for the newcomer to Bradbury; instead, it's more suited to the Bradbury completist, the reader who likes to see how Bradbury does it. The volume also contains a handful of previously unpublished short stories.

Ordering information for Masks is to be found on Gauntlet's site, here. If you are in the UK, you can save on shipping by buying from The Book Depository - they offer free delivery.

More suitable for the general reader is Bradbury's latest short story collection from Wm Morrow. We'll Always Have Paris is titled to reflect Bradbury's love affair with the French capital, a love he developed when consulting for Disney on Disneyland Paris. The French, of course, last year reciprocated the affection by awarding Bradbury the honour of Commander of Arts and Letters. Bradbury wears his medal to almost every public event he attends.

On stage, Bradbury is flourishing at present. The Wonderful Ice Cream Suit recently had a successful, if short, revival. According to the LA Times, the play "wears well". Read their review here.

Replacing Suit at the Fremont Centre Theatre, Pasadena, is Tobias Anderson in The Illustrated Bradbury. This is a one-man show in which Anderson adopts the guise of the Illustrated Man and other Bradbury characters. Information about the play can be found here (click on the "pick a show" dropdown, and select "Ray Bradbury Presents").

Running in parallel with Anderson's show is Falling Upwards, Bradbury's play based on his Irish experiences. Bradbury claims this production is the best he has ever seen of any of his plays, and who would dare to disagree? Full details about this production (at the El Portal Theatre, North Hollywood) can be found at www.raybradburysfallingupward.com

Finally, the annual International Conference on the Fantastic in the Arts is nearly upon us. It's held in Florida every year, and is considered to be one of the leading academic events in the field. I'm pleased to have had a paper accepted, so I will be presenting "Ray Bradbury's Time Interventions", which looks at how Bradbury has made use of time in his fictions - time travel, youth vs age, encounters with the younger or older self, etc.