I'm drafting the introduction to my PhD thesis, and have compiled some bibliographical crib sheets to keep on hand to make sure I don't miss out anything important. I thought this one might be useful to publish here. It's a list of key studies of Ray Bradbury's works.

It's not exhaustive, but it covers all the studies that get mentioned somewhere in my thesis. Even then, I'm bound to have missed something out.

If you want something more pictorial, check my Books About Ray Bradbury page. 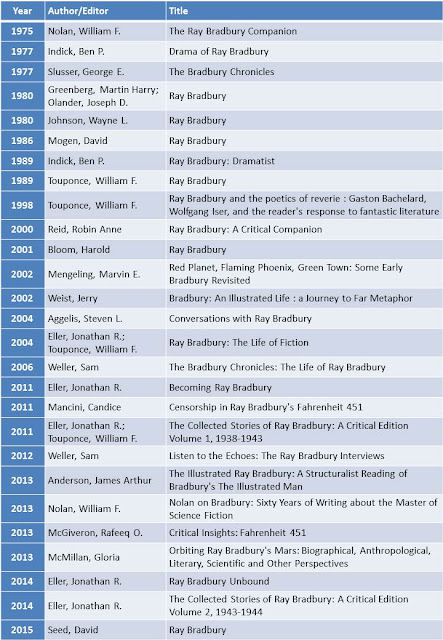 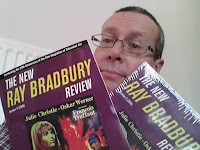 The Fahrenheit 451 special issue of The New Ray Bradbury Review, edited by yours truly, has finally landed in the UK. This fifth issue of the journal produced by the Center for Ray Bradbury Studies is a fiftieth anniversary celebration of Francois Truffaut's 1966 film based on Bradbury's classic novel.

Copies of the journal began to appear last month, but it has taken a while for it to make its way across the pond. You can order directly from the publisher, Kent State University Press, or from Amazon, using the links below.

Here's the official flyer which explains what the issue is about. I wrote the original copy for the flyer. I also wrote the introduction to the issue, and the essay which concludes the issue. Other contributors include Jon Eller (author of Becoming Ray Bradbury), Bill Touponce (co-author with Jon of Ray Bradbury: the Life of Fiction), and film scholar Joseph McBride (author of Steven Spielberg: a Biography and Whatever Happened to Orson Welles, among many others).

As of today,Bradburymedia has a Twitter feed, which you should see over there on the right.* It will mainly carry things that I have posted to the Facebook page of the Center for Ray Bradbury Studies (which I administer). Please click the links and 'like' the posts!