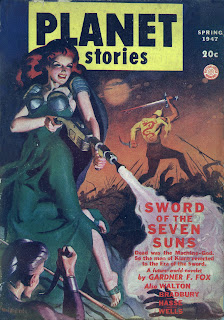 My latest Bradbury 100 podcast episode is a follow-up to the last episode, where I presented Ray's 1947 short story "Rocket Summer" from Planet Stories magazine. In that same issue, Ray contributed a humorous writer bio of himself, in which he claims that all his stories are written for him by a posse of talented professionals including Robert Heinlein!

That magazine slipped into the public domain in 1975, because the copyright wasn't renewed (following the 28-year-renewal rules in operation at that time). So, I'm bringing you the full article today!

After you hear Ray's parody bio, I'll tell you about the various writer-friends he mentions. Have you read any of these writers? Let me know in the comments below!

Bradbury 100 · Bradbury 100 - episode 41 - Ray Bradbury and his "Ghost Writer" Friends...
Please subscribe to the Bradbury 100 podcast - it's totally free on all platforms. Where to find it:
Main platforms:
Apple Podcasts  - Google Podcasts - Soundcloud - Spotify
Other platforms:

What better way to melt away the winter blues than with Ray Bradbury's "Rocket Summer"? But this episode of my Bradbury 100 podcast isn't about the familiar opening chapter of The Martian Chronicles. No, here I'm looking at Bradbury's first use of the title "Rocket Summer".

It's a rare 1947 short story, published just once in Planet Stories, and never again reprinted. You won't find it in any of Ray's books.

The 1947 "Rocket Summer"also has the odd status of being in the public domain, thanks to an oversight: it should have had its copyright renewed in 1975 (following the 28-year-renewal system in use at that time in the US). But the renewal didn't happen. 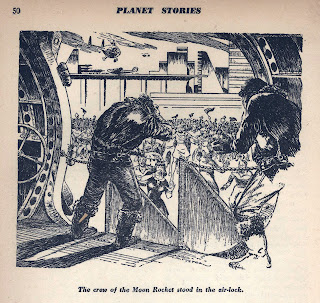 Because the story is in the public domain, I can here present the entire story to you (if you can tolerate my storytelling voice...). Scroll down to listen, or find it using your podcast app. 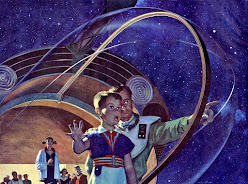 Time for a new Bradbury 100 podcast episode - and because it's (nearly) Christmas, I thought I'd talk about Ray's use of Christmas in his stories and scripts.

The two stories that specifically reference Christmas are "The Gift" and "The Wish" - and there are two pieces of film/TV work which also mention Christmas: the Steve Canyon episode based on "The Gift"; and Ray's unlikely sequel to The Day The Earth Stood Still.

It's become a tradition that, every Christmas, I post the delightful Ren Wickes illustration for "The Gift" which appeared alongside the story when it was first published in Esquire magazine in 1952. So, here it is! (It should be up above - and if you click on it, it should embiggen.)

I hope you enjoy this Christmas episode - it's below, or you can find it using your podcast app. Join me in 2023 for more Bradbury 100 episodes!


Posted by Phil at 11:47 am No comments:
Email ThisBlogThis!Share to TwitterShare to FacebookShare to Pinterest 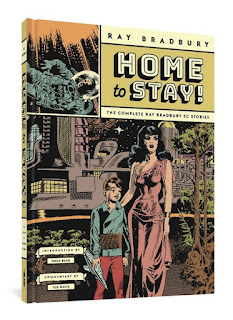 Time for a new episode of Bradbury 100!

This time I review the new book Home to Stay: The Complete Ray Bradbury EC Comics Stories, and dig into Ray's connection with the famous EC Comics. Click here for a preview of the contents of Home to Stay, courtesy of publisher Fantagraphics.

In the episode, I also refer to Jerry Weist's Bradbury an Illustrated Life. You can find that one here: Amazon US - Amazon UK.

And learn about TheAutumn People here - and Tomorrow Midnight here.

You can find the old Ray Bradbury Comics in lots of places, such as this one.

To make it easier for you to discover my Bradbury 100 podcast, you'll periodically see this page, which gathers all the episodes and shows together.

Episode 29 - Ray Bradbury and the question of "style"

Episode 27 - The Illustrated Man at Seventy (also available in extended, illustrated, video form - see Bonus Video episodes at the top of this list)

Episode 26 - tracking down "The Lonely One"

Episode 17 - with highlights from two centenary events: Bradbury 100 Live and The Martian Chronicles at Seventy (both of these events are also available in extended video form - see Bonus Video episodes at the top of this list)

The best way to never miss an episode is to subscribe for free with your podcast app/service of choice. See the list of links below!


Posted by Phil at 8:44 am No comments:
Email ThisBlogThis!Share to TwitterShare to FacebookShare to Pinterest
Labels: Bradbury 100, podcast 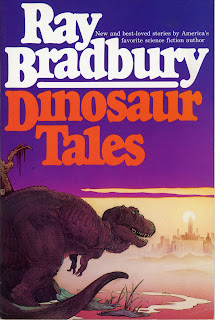 Time for another episode of Bradbury 100. This time I explore Ray's dinosaur stories - which he conveniently collected together under the title Dinosaur Tales!
This volume has "A Sound of Thunder", "The Fog Horn", "Tyrannosaurus Rex" and more. Especially valuable are the illustrations, provided by some of the leading artists of the SF/fantasy world.

Posted by Phil at 3:26 pm No comments:
Email ThisBlogThis!Share to TwitterShare to FacebookShare to Pinterest
Labels: A Sound of Thunder, Bradbury 100, Dinosaur Tales, podcast, The Fog Horn, Tyrannosaurus Rex

Take Me To Your Reader - Something Wicked 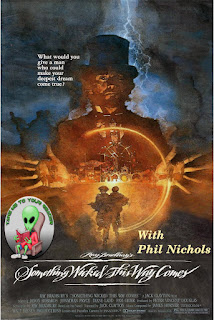 I was invited to make a return visit to the Take Me To Your Reader podcast, to discuss Ray Bradbury's Something Wicked This Way Comes.

TMTYR deals with books and their adaptation to movies, TV and other media. On this occasion, what you might think is a simple process of adaptation (book ---> movie) turns out to be more complex, since Something Wicked actually began life as a screenplay, before becoming a book, and then being adapted for film.

Thanks to regulars Seth, Colin and James for inviting me back on!

Listen to the show here:

Posted by Phil at 9:45 pm No comments:
Email ThisBlogThis!Share to TwitterShare to FacebookShare to Pinterest
Labels: podcast, Something Wicked This Way Comes, SWTWC, Take Me To Your Reader

Here's an oddity, which I first wrote about on Facebook in 2014, but I don't believe I've ever commented on it here on Bradburymedia.

FAHRENHEIT 451 (Francois Truffaut, 1966): A dying man teaches a young boy the text of Weir of Hermiston by Robert Louis Stevenson. One of the most touching sequences of the film. 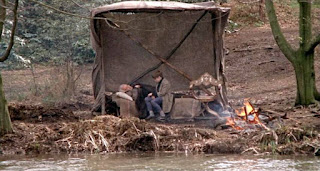 Although the viewer assumes that the text is accurate, the film actually uses a paraphrase of Stevenson, and the highly affecting final line is made up for the film:
"And he died as he thought he would, while the first snows of winter fell."
The paraphrase might be easily explained: Truffaut and Jean-Louis Richard wrote the screenplay in French, and then had it translated into English; they may well have quoted Stevenson from a French-language source, and something was lost in translation. (This is conjecture on my part. I would love a French-speaking scholar to compare the original French screenplay and the contemporary (early 1960s) published French-language version of Weir of Hermiston.)
Ray Bradbury was so taken with the ending of the film, that he borrowed it for his own stage play version. And he borrowed the Weir of Hermiston scene from the film: Hermiston isn't mentioned in Ray's novel, but is quoted in the play, exactly as in the film. Ironically, the play misquotes exactly as the film does. How curious - especially for a work (Fahrenheit) whose logic depends on accurate oral reproduction of texts which have been physically destroyed... 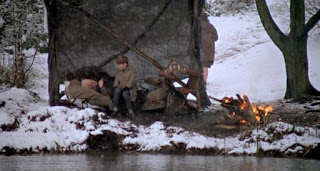 UPDATE:
It's been pointed out that the first section of the Hermiston dialogue in Fahrenheit 451 is, in fact, a direct quotation from Stevenson. But that leaves the final two lines - which are either made up, or are (at best) a paraphrase. Given that the first lines are a direct and accurate quotation, my conjecture above about something being lost in translation looks unlikely. Instead, it looks as if Truffaut was adapting Stevenson's words to fit the situation of the snowfall.
And the snowfall is known to have been accidental. Filming in England in (if I recall correctly) April, there was an unexpected and unseasonal snow shower. Ever the instinctive filmmaker, Truffaut took advantage of this opportunity to enhance the poignancy of the scene, with that line: "And he died as he thought he would, while the first snows of winter fell."
Curiouser and curiouser...
Posted by Phil at 3:09 pm 1 comment:
Email ThisBlogThis!Share to TwitterShare to FacebookShare to Pinterest

Time for another new episode of my Bradbury 100 podcast! And this time, it's something of a true crime mystery...

Several years ago, I mentioned on this blog that I would soon be publishing never-before-seen facts about the shocking murder of Lester Moberg, Ray's uncle, which happened when Ray was just twelve years old. Uncle Lester popped up in several of Ray's interview anecdotes, although Ray never wrote Lester into his fiction.

Somehow, time ticked by with me never quite getting round to writing the article. Until Bradbury 100 became a thing, and I figured that, one day, I'd probably talk about Uncle Lester on the pod.

Well, it was ninety years ago this week that Lester's life was brought to a sudden end, so this seems like a good time to tell all. Besides, it's spooky season, and what better way to celebrate than with a murder mystery?

Not much has been published previously about the murder of Lester Moberg. Sam Weller, in The Bradbury Chronicles, merely says it was a random hold-up. But when I studied the transcript of the coroner's inquest (thanks to the Waukegan Historical Society, who have a copy in their Bradbury files) along with related documents, I began to sense that there was more to the story. The evidence is circumstantial, but I was able to put a suspect in the frame. Listen to the pod, and see what you think. But - as I warn near the beginning of the pod - do be warned that this is an unsolved case, so don't go expecting a definite resolution.

...and here's a short out-take: a little snippet of testimony which didn't make the final cut of the episode. In this clip, you'll hear what Lester's brother Philip had to say about Lester and his divorce:

Posted by Phil at 11:57 am No comments:
Email ThisBlogThis!Share to TwitterShare to FacebookShare to Pinterest
Labels: Bradbury 100, podcast

Specially for October, here's a new episode of my Bradbury 100 podcast. I discuss The October Country, Something Wicked This Way Comes and The Halloween Tree.

I cover the origins of each of these classics, including the peculiar way that both Something Wicked and The Halloween Tree started off as film projects before turning into the books we know and love.

In the episode, I mention other places where I discuss these works. Here are are some handy links to those:

You might also want to check out this previous October-themed episode of the podcast!