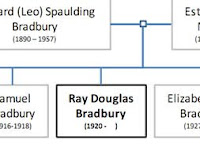 I occasionally get emails asking about Ray Bradbury's ancestry. So, as a public service, here's a link to an earlier post (wow, it's nearly ten years old!) where I unveiled his family tree:

Twenty-four years ago, in April 1995, The Magazine of Fantasy and Science Fiction debuted a new Ray Bradbury short story. "Another Fine Mess" is one of Bradbury's tributes to Laurel and Hardy, and another of his laments for the old Hollywood of his childhood.

Bella Winters, newly moved into a house near Effie Street in Los Angeles, awakens one night and hears voices outside. And what sounds like a piano being hit. She becomes convinced that she is hearing, in the darkness outside, Laurel and Hardy attempting to get a piano up the steep concrete steps. She calls her friend Zelda, a silent film fanatic, and Zelda too becomes convinced that Stan and Ollie are somehow haunting the steps. Perhaps, Bella suggests, they have returned because no one has ever told them how much they are loved...

The piano reference is, of course, to Laurel and Hardy's classic, Oscar-winning short film The Music Box (1932), in which the comic duo repeatedly attempt to get a boxed upright piano up an impossibly long flight of stairs.

As a longtime resident of Los Angeles, and a lifelong fan of Laurel and Hardy, Bradbury knew and loved the old Hollywood. Bella and Zelda represent aspects of himself, both characters being around his own age, and speaking of seeing Laurel and Hardy films in their early childhood. The old Hollywood may be gone, but vestiges of its geography survive even today, and Bradbury's story is partly a celebration of this. Bradbury had previously returned to old Hollywood in his 1990 novel A Graveyard for Lunatics, a fictionalised account of his own adventures in 1950s Tinseltown.

Oddly, for all his Angeleno knowledge and familiarity with Hollywood, Bradbury doesn't place "Another Fine Mess" at the real location used in The Music Box. The steps seen in the film are located in the Silver Lake area of Los Angeles, and run between Vendome Street and Descanso Drive. For some reason, though, Bradbury sets his story on nearby Effie Street. It's a similarly hilly place, and does indeed have some long concrete steps. But it has nowhere quite like the real Music Box steps. Of course, the story is a fantasy - Bella Winters' waking dream - so has no obligation to reflect reality. But it makes me wonder if Ray was basing the story's location on a particular house that he knew.

Laurel and Hardy purists might further object to Bradbury's Ollie repeatedly saying "Another fine mess" - when the real Hardy tended to say "Another nice mess". However, I'm going to give Ray a pass on this, since there is a Laurel and Hardy short called Another Fine Mess (1930). If Laurel and Hardy are allowed to misquote, then so is Ray!

Today, you can find "Another Fine Mess" in two of Ray's books: Quicker Than The Eye and Bradbury Stories: 100 of His Most Celebrated Tales.

And you can learn how the once-lost Music Box steps were "re-discovered" here: http://www.laurel-and-hardy.com/films/talkies/music-location.html
Posted by Phil at 8:05 pm 1 comment: