While most listeners to my podcast Bradbury 100 listen online or via a podcast app, a good few listen to it via YouTube - but I got way behind in keeping the YouTube copies up to date.Oops!

So I've been putting things right this week, with two episodes belatedly added today, and more to follow in the next few days. So if you're one of those YouTube followers who were wondering when Episodes 14-18 had got to, wonder no more.

The YouTube channel, with episodes 1-15 can be found here.

And below is my periodic re-post of how to find all the individual episodes with their show notes:

To make it easier for people to discover my Bradbury 100 podcast, you'll periodically see this page, which will gather all the episodes and shows together.

Episode 17 - with highlights from two centenary events: Bradbury 100 Live and The Martian Chronicles at Seventy

The best way to never miss an episode is to subscribe.

But let's not confuse matters!

In any case, the centenary-style celebration of Ray can continue. We don't need any excuse for that. And so, with a minor little drum role, I will introduce you to this year's successor to my Bradbury 100 podcast. 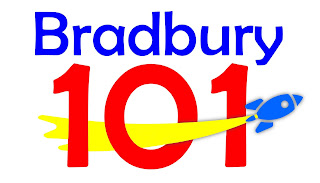 Bradbury 101 is not simply clicking the year on and saying, "Oh, we're celebrating Ray's 101st year now." No, it is a sort of sister podcast to Bradbury 100. Think of it as "Bradbury for beginners", or "introducing Ray Bradbury".

It's going to be a while before I launch the first episode, but you'll be the first to hear about it here on Bradburymedia. The episodes will be shorter than the Bradbury 100 episodes, more in the way of bite-sized examinations of Ray's work. And it will adopt a more-or-less chronological approach, talking about each of Ray's major works in turn. I think you're going to like it!