Ever wanted to re-read a particular Ray Bradbury story, but didn't know which collection it was in? Allow me to introduce you to a handy feature of Bradburymedia: the Short Story Finder!

The Short Story Finder lists (nearly) every Ray Bradbury story, and tells you where it was originally published, and which Bradbury collections you can find it in.

It also includes the "Eller Reference" for each story. This is a two part number-code which indicates the year of original publication, and the position of publication within that year. For example 46-04 indicates the fourth Btradbury story published in the year 1946. This numbering scheme originated with Jon Eller, Ray's literary biographer, who used it in Ray Bradbury: The Life of Fiction and in the ongoing Collected Stories of Ray Bradbury series of books.

So, without any further ado, I give you:

The Short Story Finder!
Posted by Phil at 2:40 pm 2 comments: 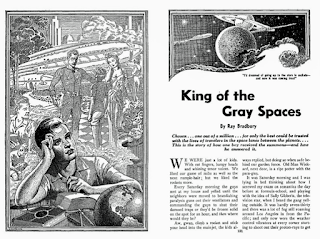 Retro Hugos are special awards given for years where the standard Hugo Award was not awarded for some reason, mostly due to the Second World War interrupting the usual continuity of the Worldcon.

Bradbury has been awarded Retro Hugos in the past - the 1939 award for Best Fanzine, and the 1954 award for best novel (Fahrenheit 451).

"King of the Gray Spaces" is an early Bradbury science fiction tale, and is typically considered as the first to show the emotive style he is associated with. First published in Famous Fantastic Mysteries magazine in December 1943, the story has frequently been reprinted under the more familiar title "R is for Rocket".

In the story, fourteen year old Christopher and his friends long to be chosen for the space corps. They know that they can't "apply" for this; they have to be chosen. The key emotion of the story comes when Chris is indeed chosen, but as part of the selection process he has to keep it a secret even from his best friend Ralph. Chris's elation is contrasted with his sadness at having to leave Ralph behind, and with Ralph's muted understanding of what is happening to Chris.

Some elements of the story are quite dated now, and in fact Bradbury was aware of this when he made it the title story of his 1962 collection R is for Rocket: he made some changes to the story to bring it more up to date.

When the story first appeared in Famous Fantastic Mysteries, it was accompanied by a magnificent illustration by Lawrence Sterne Stevens (shown above).

When the Retro Hugo win was announced, my friend Jason Aukerman of the Center for Ray Bradbury Studies took the stage to receive it on behalf of the Bradbury family and the Bradbury estate. Jason took the opportunity to remind the Worldcon audience that in exactly one year and one week it will be Bradbury's one hundredth birthday. The awarding of the Retro Hugo makes a fine lead-in to the Bradbury Centenary.