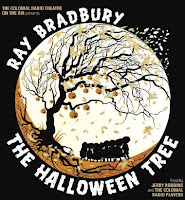 Finally, an anonymous poster to this blog has reminded me that Bradbury will be honoured with a lifetime achievement award at the forthcoming Ojai Film Festival in California.
Posted by Phil at 9:52 pm 1 comment:

October is a rare month for boys... according to the opening lines of Bradbury's Something Wicked This Way Comes, at least. But it's far from a rare month for Bradbury. As Halloween approaches, it always feels like Bradbury Season.

To help make it so this year, two significant adaptations are on their way. In audio, Colonial Radio Theatre's production of The Halloween Tree - scheduled for a 1st October release - is now available on CD via Amazon. (And this isn't just a theoretically-available item, they really are shipping it now.) I have been writing a review of this lavish production, but have been caught on the hop by its early, unheralded release. Watch this space for my review, which is coming real soon now, honest.

And on stage, the National Theatre of Scotland in conjunction with Catherine Wheels Theatre Company will shortly be touring (mostly Scotland, but one venue in England) with a new production of Bradbury's own stage play version of Something Wicked. I hope to catch the play when it makes its brief visit south of the border.
Posted by Phil at 9:27 am No comments: