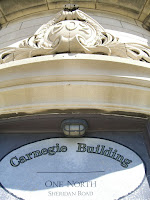 The development plans for the Carnegie Library in Ray Bradbury's home town of Waukegan, Illinois, are moving forward. The Ray Bradbury Waukegan Carnegie Library, Inc. (RBWCL) is the newly formed body which is trying to establish a museum and educational centre in the library building that Ray Bradbury visited frequently in his childhood.

A fictionalised version of the library lies at the heart of Bradbury's novel, play and film Something Wicked This Way Comes, and references to the same library crop up frequently in Bradbury's books and stories.

The mission statement of RBWCL is as follows:

RBWCL has a new website, which includes several draft plans for the various floors of the Carnegie building. Take a look: www.bradburycarnegie.org