Terry Pace does a good job in keeping Ray Bradbury's theatre, film and TV work in the public eye. His Pillar of Fire theatre group has a Facebook page, and is also profiled in this report (and YouTube video) on the Left In Alabama website.

Meanwhile, the Wall Street Journal reports on another stage production of Fahrenheit 451... with a contemporary political viewpoint.

Nominations have been published for the 2011Audie Awards - given for excellence in spoken word production by the Audio Producers of America. Among the nominees in the short story collection category is Bradbury's Long After Midnight, narrated by Michael Prichard. See the full list of nominees here.
Posted by Phil at 8:00 am No comments:

The blog of Indiana University's Lilly Library has a recent post on Anthony Boucher, the famed (and pseudonymous) editor and writer. In SF circles, Boucher is probably best known as founding editor of The Magazine of Fantasy and Science Fiction. However, he had a long career as an author in several genres, and also dabbled in writing for radio and television.

The Lilly Library's connection to Boucher is its collection of his manuscripts and correspondence which includes missives exchanged with Bradbury and many others.

According to the Washington Post September 2011 will see a one-month run of a new production of Bradbury's stage play of Fahrenheit 451. This production, it claims, "takes things that Bradbury could only write about and made them 'manifest onstage with the new technology.' " I wonder whether this means parlour-wall screens for Millie, a Mechanical Hound, or some other marvel.
Posted by Phil at 8:00 am No comments:

Update on VISIONS OF MARS

The book Visions of Mars is approaching publication. Its a collection of essays and articles which are mostly derived from the 2008 Eaton Conference, which was subtitled "Chronicling Mars". The book looks at the way Mars has been depicted in literature, film and popular culture.

The table of contents is now online. I see my chapter "Re-Presenting Mars: Bradbury’s Martian Stories in Media Adaptation" is smack in the middle of the volume. There is one other paper specifically about Bradbury, from Eric Rabkin, and also a transcript of a roundtable discussion between Bradbury, Fred Pohl and George Slusser. I'm sure there will many other passing references to Bradbury, as my recollection of the conference is that his name came up again and again.

The volume is quite expensive (40USD for a softcover version), but this is an academic volume and they tend to be pricey. Release date according to the publisher is now May 2011. (I notice that Amazon still shows the original release date, and also has a higher price than McFarland publishers!)

I see that Harlan Ellison has been nominated for a Nebula Award from SFWA (the SF and Fantasy Writers of America) for his short story "How Interesting: a Tiny Man". The story was first published in February last year in Realms of Fantasy magazine, copies of which can be ordered from the magazine's own website.

Ellison is no stranger to the Nebulas. He was the first ever recipient in the Short Story category, for "'Repent, Harlequin!' Said The Ticktockman" in 1965. His last Nebula win was 1977's "Jeffty is Five". His most recent nomination (before "Tiny Man") was in 2003 for "Good-Bye To All That".

"How Interesting: a Tiny Man" is a beautifully clear piece of writing, but is deceptively more complex than it appears on first reading.
Posted by Phil at 8:00 am 2 comments:

I'm just back (a couple of days ago) from the Eaton Conference in Riverside, California, where I presented a paper on a different writer for a change: Harlan Ellison. My paper was titled "Living in a Limited World: Omniscience and Point of View in the Works of Harlan Ellison", and in it I discussed some of the ways Ellison has used point of view to get across the emotional and/or intellectual impact of his stories and screenplays. Among the works I discussed were Ellison's screenplay Phoenix Without Ashes (recently adapted for a comic book series) and his classic short stories "The Deathbird" and "The Man Who Rowed Christopher Columbus Ashore" (soon to be re-published in a new, revised edition of Deathbird Stories from Subterranean Press).

Harlan was originally expecting to be attending some of the conference events, but ill health unfortunately forced him to cancel. He was due to receive a lifetime achievement award from the Eaton Conference/Eaton Collection, so he asked his friend Steve Barber to accept it on his behalf. I was able to spend some time with Steve, and Steve kindly offered to give Harlan a copy of my paper.

A couple of days later, Harlan posted the following on his website:

"[...] Steve Barber and Cris got the Eaton proclamation to me, it is as big as Austria, and we have it propped up in the dining room. Steve also delivered Phil Nichols's paper on me (the original, with all the defamatory parts pencilled out) and I must say that while I am completely oblivious to the two academic papers cited (Royle and Rimmon-Kenan), had Phil answered the phone when I called him at Riverside, I would've had some effulgent praise for his notice of, and appreciation for, the use of cinematic expansion&contraction sans voiceover or dialogue that apparently I was autodidactically smart enough to use at the end of PHOENIX WITHOUT ASHES. In short, Phil, I was much put a-smile by your observations on my efforts. I would've liked to have heard it live, then debated it with you. [...]"

That latter part - about debating it with me - would have probably turned me to jelly. The same goes for the phone call, which I apparently missed.

Here's the Eaton proclamation, in the hands of Barber the Ellison stand-in. It's not literally as big as Austria, it's just that Harlan is what we call a creative writer. 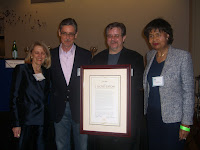 Bradbury's Fahrenheit 451 is quoted in an article from Shelf Awareness on the smell of books! With the growth of e-books, it is only a matter of time before book smell is gone forever, like the sound of the typing pool. Read more about some of the less obvious aspects of book odour in the fascinating artcle, here. 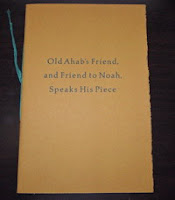 Horrorgy, a blog run by internet book dealers Horror Mall, has published a full list of the chapbooks published by Roy A. Squires. These slender volumes, often hand-finished, featured many fantasy and horror writers between 1962 and 1979. Bradbury was published several times. See the full list here.
Posted by Phil at 8:00 am No comments:

McDermott's article is in four parts, and because it's in his blog it might be difficult to locate all the parts, so here are direct links to the sections:
Part 1 - Part 2 - Part 3 - Part 4 - References
Posted by Phil at 8:00 am No comments:

Off to a Conference

The Eaton Conference is about to begin in Riverside, California. I will be there to present a paper, although for once I will not be talking about Bradbury.

On this occasion, I will be speaking about Harlan Ellison's work. It is one of two papers on Ellison, who is also due to receive the 2011 Eaton Award for lifetime achievement in fantastic literature. The other paper will be from Rob Latham of University of California Riverside.

Harlan has announced that he intends to be present for the award presentation on Saturday, and that he will also attend the Friday night screening of Erik Nelson's excellent documentary Dreams With Sharp Teeth.

If you happen to be in Riverside for the conference or related events, please say hello. I'll be the Brit with the fixed grin, if the photo of me on the conference webpage is anything to go by...
Posted by Phil at 8:00 am No comments:

Best-selling novelist Jamie Ford, author of Hotel on the Corner of Bitter and Sweet, has outed himself as the purchaser of Harlan Ellison's typewriter. You may recall that Harlan decided to do a Cormac McCarthy and put one his early-career typewriters up for auction. (If the story is new to you, read my earlier blog post on the topic. I wait here for you while you read this link.)

You can read Jamie's account of his purchase on his blog, here.
Posted by Phil at 8:00 am No comments: 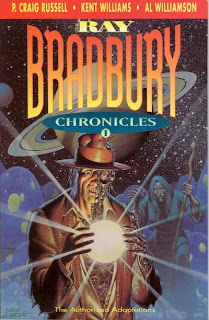 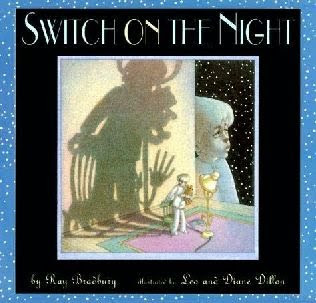 Finally, Canadian-Armenian actor Garen Boyajian, best known for a role in Ararat, has announced that he is developing a film based on Bradbury's Death is a Lonely Business.
Posted by Phil at 8:00 am No comments: 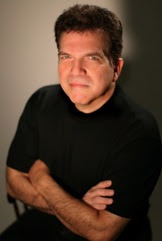 Lou Aronica was once an editor at Bantam Books, and was responsible among other things for Ray Bradbury's books. He has now turned author himself, with a novel called Blue.

In this blog post, he talks about his first attempt to contrive a meeting with Bradbury. What's amusing is his account of his worrying over what Bradbury will think of him, and how he might be treated. He concludes, "Ray Bradbury isn’t the man I idolized on the page; he’s so much more regal than that."

Another blog has a Q&A session with Aronica, where he again names Bradbury as a favourite autor.
Posted by Phil at 8:00 am No comments: