Noting the impact of the Southwest on Bradbury, some of the essays analyze Bradbury’s southwest metaphors: colonial pollution of a pristine ecology, the impacts of a colonial invasion upon an indigenous population, the meeting of cultures with different values and physical aspects. Other essays view Bradbury via the lens of post-colonialism, drawing parallels between such works as The Martian Chronicles and real-life colonialism and its effects. Others view Bradbury sociologically, analyzing border issues in his 1947 New Yorker story "I See You Never," written long before the issue of Mexican deportees appeared on the American literary horizon. From the scientific side, four essays by astronomers document how Bradbury formed the minds of many budding scientists with his vision.


The book is due for release towards the end of the 2013, but is available for pre-order now from the website of the publisher, McFarland. McFarland previously published Visions of Mars, to which I contributed an essay on Bradbury's Mars.
Posted by Phil at 9:05 pm No comments:

New Short Film - All Summer in a Day

All Summer in a Day is a short film production funded via Kickstarter, the crowd-funding website. It's based on the Ray Bradbury short story, which has been filmed once before. The Kickstarter target was a modest $5000 or so, which was reached in April.

You can read more about the production here, and here is the trailer/pitch:

Email ThisBlogThis!Share to TwitterShare to FacebookShare to Pinterest
Labels: All Summer in a Day, short film

It was reported today that animator Ray Harryhausen has passed away. He was 92 years old.

He and Ray Bradbury were born in the same year, and first met in Los Angeles when they were both in their teens. They shared a passion for dinosaurs and King Kong, and remained friends across the decades.

The two Rays never directly collaborated, but they both had credits on the 1950s movie The Beast From 20,000 Fathoms. Bradbury wrote the story the film derived from; Harryhausen brought the Beast to life with his amazing animation, achieved on a remarkably low budget.

Some years later, Bradbury wrote a short story called "Tyrannosaurus Rex", about a monstrous film producer and the stop-motion animator who wreaks sweet revenge on him. Harryhausen was clearly the model for the animator (but I don't think the real-life producer has ever been identified...).

Later still, Bradbury made a fictionalised version of Harryhausen into a central character of his Hollywood novel Graveyard for Lunatics.

As the two Rays aged, and travel became difficult, they saw less of each other. Their last meeting was about six years ago when London-based Harryhausen made his last trip to Los Angeles. The photo above shows the two at a public event in 2007.

Three years ago, Ray Harryhausen announced that he was donating the life's work - models, papers, the lot - to the National Media Museum in Bradford, England. This should ensure that his work is properly memorialised, and that researchers will be able to gain access to his sketches and working papers.

Looking back, I am surprised to see how often I mentioned Harryhausen on this blog, but when you consider the importance of the two Rays to each other, there is no real surprise. Click here to see previous posts about the late, great Ray Harryhausen.
Posted by Phil at 7:45 pm No comments:

Email ThisBlogThis!Share to TwitterShare to FacebookShare to Pinterest
Labels: Harryhausen

Books on Bradbury, new and forthcoming

It's nearly a year since Ray Bradbury died, but interest in his work continues, as evidenced in a number of books newly released or announced.

Searching for Ray Bradbury is a slim, inexpensive volume from Bradbury's friend and collaborator Steven Paul Leiva. It collects Steven's writings on Ray, previously published in various newspapers, magazines and websites. I'm currently reading this book, and will be reviewing it here in the near future. For now, I'll just say that it captures some of the spirit of celebration of the events Steven co-ordinated in recent years, such as Los Angeles' Ray Bradbury Week and the dedication of Ray Bradbury Square.

Nolan on Bradbury is William F. Nolan's return to writing about his lifelong friend. A highlight of Nolan's early career was his publication of The Ray Bradbury Review, the first study of any aspect of Bradbury's work. Nolan would soon develop a career as a creative writer which paralleled Bradbury's, with work in the fields of SF, fantasy, horror and crime fiction, and with significant excursions into screenwriting. Nolan's list of significant books includes the novel Logan's Run (written with George Clayton Johnson) and the scrapbook-style The Ray Bradbury Companion. Now Nolan on Bradbury promises to collect "sixty years of writing" about Bradbury, and is adorned with a Joe Mugnaini rendering of Bradbury's "The Pedestrian". I hope to review this book soon.

Lord Dunsany, H.P. Lovecraft, and Ray Bradbury: Spectral Journeys is William Touponce's latest study, attempting to map Lovecraft's notion of spectral literature as "literature that involves the gothic themes of the supernatural found in the past but also concerned about modern society and humanity", and showing how his tradition or mode of writing developed through the twentieth-century. Bill's previous work on Bradbury is extensive, including the study Ray Bradbury: the Life of Fiction (written with Jon Eller) and directing the Center for Ray Bradbury Studies from 2007-2011. This book is listed for publication in October... the ideal month for Bradbury.

Finally a brief note on The Collected Stories of Ray Bradbury: a Critical Edition, Volume 2. I am pleased to report that I have been appointed as a consultant on this volume, which is currently approaching it's final shape. The contents of the volume are more or less settled, with just a few items of the critical apparatus still to be completed. I'll give more details when I can. (Volume 1, of course, is already available.)
Posted by Phil at 8:00 am 3 comments: 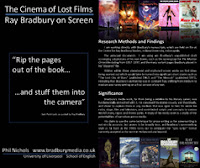 I recently had to produce a poster outlining my PhD research project in terms that could be understood by a non-expert. I went for a straightforward approach of a brief description and some simple illustrations drawn from book covers, film posters and DVD sleeves. As it was produced for viewing online, I opted for a landscape design.

The poster was on display for two weeks on the website of Liverpool University during the "Poster Day Online" event. The event is now over, so I can make it viewable here.

Click here, then, to view the full-size PDF of The Cinema of Lost Films: Ray Bradbury on Screen.
Posted by Phil at 3:48 pm No comments: