Now with added video: The Illustrated Man at Seventy

A week ago (or so) I put out a Bradbury 100  podcast episode containing the audio of my recent talk about The Illustrated Man. Well, now the University of Wolverhampton has released the full video recording of the talk, so you can now see me as well as hear me.

While that is certainly not a good reason to watch, there is a significant advantage in watching: it's a heavily illustrated talk. How appropriate is that? 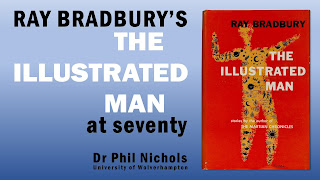 A few days ago, I gave a livestreamed talk on Ray Bradbury's The Illustrated Man, a book which is seventy years old this year. The talk was given as part of the University of Wolverhampton's Artsfest Online.

A video recording of the event will be made available shortly, but in the meantime below is the audio from the talk, slightly edited so that it works without the illustrations. (Anyone who has seen any of my talks knows that I firmly believe in using illustrations!)

Thanks to everyone who attended the live version of the talk, which generated some interesting Q&A at the end. I've left the Q&A out of the podcast audio because it was poor quality, but it should be included in the video version when that is released.

One person asked me a tough question: was Ira Levin's The Stepford Wives influenced by Ray Bradbury's short story "Marionettes Inc"? You may recall that both of these works deal with robot replacement humans in a domestic environment. I admit to being stumped by that question - and I still am!

I've never seen anything that specifically connects the two writers, but given Levin's interest in dark subjects and fantastical story premises (not only Stepford but Rosemary's Baby, The Boys From Brazil, and others) it's hard to imagine that he wasn't aware of Bradbury's fiction. And "Marionettes Inc" was a story which was well known in the 1950s. It was adapted for radio more than once, and Bradbury adapted it for Hitchcock. It was also widely anthologised.

But short of reading a biography of Levin - which I now feel compelled to do! - I don't have an answer to that Stepford Wives question.

What I do know, however, is that Bradbury felt that Rosemary's Baby borrowed heavily from his classic short story "The Small Assassin". I think Bradbury was more bothered by the film version than Levin's book; and, of course, the only thing they have in common is the basic premise of an evil baby. But that's all I know of Bradbury versus Levin.

Email ThisBlogThis!Share to TwitterShare to FacebookShare to Pinterest
Labels: Artsfest, The Illustrated Man

It's free and open to all, but you have to register. Details here:
https://www.eventbrite.co.uk/e/ray-bradburys-the-illustrated-man-at-seventy-tickets-203217999507
Posted by Phil at 10:10 am 2 comments: