I've discovered the existence of a documentary entitled Malls R Us, thanks to this brief report. It seems it includes a small section that references Ray Bradbury. It looks like the closest thing there is to an official website for the film is here at Icarus Films.

So what does Bradbury have to do with shopping? For a few years he was retained as a conceptual consultant by the architectural practice Jon Jerde and Associates. During this time he wrote several essays where he explored the idea of the town and the shopping experience. The essays are collected in Bradbury's book Yestermorrow.

One of Bradbury's ideas is that of "lostness": that we shouldn't be able to predict exactly what we find when we wander around a town or shopping centre; that we should occasionally find that we have taken a turn that leads to a dead end, and we should have to re-trace our steps. Another is his idea that, despite what they say, most people do not go out to shop; they actually go out to eat, and the shopping they do actually fits around the food and drink experience.

I'm no expert on architecture or shopping, but I sense the Bradbury influence in almost every modern mall I visit. How else to explain the rise of the "food court"?

I haven't yet seen Malls R Us, but I hope to get an opportunity soon.
Posted by Phil at 10:00 am No comments:

Ray Bradbury must find it difficult to move for all the awards and accolades his house must be filled with. This photo shows him receiving another one, the "Pioneer Award in Mass Media" from the National Space Society. The full story is here, and a full list of previous winners and a detailed photo of the Moon-inspired trophy is here.

Found on the web: discussion of another high school production of Bradbury's stage play version of Fahrenheit 451.
Posted by Phil at 4:12 pm No comments: 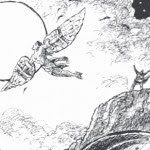 Entersection is a website that presents quotations, some of them quite extensive. It's one of those sites that you could spend hours browsing. A recent addition is this section from Ahmed and the Oblivion Machines. I have a copy of Ahmed, but have not yet found the time to read it. Little did I know that it includes a re-telling of Icarus, incorporating Bradbury's oft-repeated phrase about jumping off a cliff and building your wings on the way down...


Cory Doctorow has just published a review of a young adult book called The Boneshaker, by Kate Milford. He describes it as "filled [with] the rich Bradbury stuff, that haunting and deliciously spooky stuff that lives in the shadows and ride through the land on creaking wagons with dusty brocade curtains". Read the review here, and see the publisher's page for the novel here.
Posted by Phil at 10:00 am 2 comments: 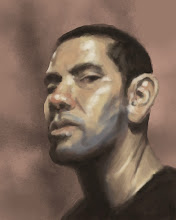 Found on the web: artist Nelson Hernandez of San Jose, California, has created some striking character designs inspired by Bradbury's short story "The Man Upstairs". View them on Nelson's blog.

Also found on the web - probably across the entire blogosphere by the time you read this - is Neil Gaiman's fulsome tribute to Ray Bradbury, published by The Times.
Posted by Phil at 10:00 am No comments: 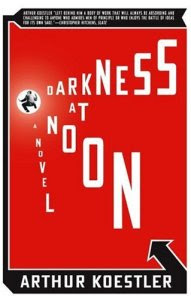 I'm currently reading around the edges of Fahrenheit 451, as part of a study of both Bradbury's work and Francois Truffaut's 1966 film adaptation.

I just finished Arthur Koestler's novel Darkness at Noon, which is a fascinating inside look at post-revolutionary Russia - although Koestler, writing in 1940, carefully avoids specifying any of the countries where the events of the novel take place. I found the novel quite chilling and atmospheric, but was constantly reminded of George Orwell's Animal Farm (1945) AND Nineteen Eighty-Four (1949). I understand that Orwell was familiar with Koestler's work, and even wrote an essay about him. I will have to track this down.

Immediately after finishing the novel, I moved on to Sidney Kingsley's 1951 play based on Koestler's novel. I was pleasantly surprised to find that the hardcover edition of the play includes photographs from the original Broadway production. The original cast of the play included Claude Rains (in the lead role as Rubashov), and Kim Hunter.

All of which brings me back to Bradbury. We know that Bradbury knew Koestler's novel and that he saw Kingsley's play. In fact, he was once quoted as saying that he thought Koestler captured aspects of totalitarianism more accurately than did either Orwell or Aldous Huxley.

Bradbury was also an admirer of Claude Rains, although the only professional connection between them (that I can think of) is the Alfred Hitchcock Presents adaptation of Bradbury's "And So Died Riabouchinska". Bradbury's admiration of Rains is referred to in this account of Terry Pace's 2009 production Claude Rains: An Actor's Voice.
Posted by Phil at 10:00 am No comments:

Steven Paul Leiva's ambitions for Ray Bradbury Week (mentioned previously on this blog) now also include a package of illustrations and/or animations to be presented to Ray Bradbury. Full details are given on Cartoon Brew, here. Bradbury, of course, has a long association with animation: he was a childhood pal (and lifelong friend) of Ray Harryhausen; a close friend of Chuck Jones, with whom he originated The Halloween Tree; worked extensively with Disney (albeit mostly on theme parks rather than animated films); worked on an animated short of Icarus Montgolfier Wright, which received an Oscar nomination; received an Emmy for his work on the TV film version of The Halloween Tree; and did the original script for the somewhat abortive Little Nemo feature film. And has seen countless animators develop his short stories into films.

According to an article from Wired, we could in the near future have animated tattoos, just like Bradbury's fictional character in "The Illustrated Man". It's all thanks to a bizarre new use for LED technology.

The Wired article is here, and below is a video simulation of this strange new concept:

The Chronicles of Ray 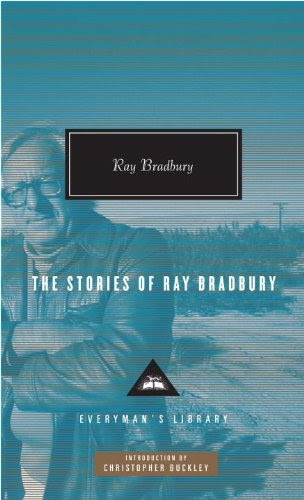 Reviews continue to appear for the new Everyman edition of The Stories of Ray Bradbury. One that caught my eye for its insight and accuracy is this one from Slate.

Meanwhile, Subterranean Press have confirmed that The Martian Chronicles: the complete edition is about to start shipping any day now. This volume, you may recall, is a dreadfully expensive limited edition of the Chronicles with copious additional material, such as previously un-chronicled Martian tales and various screenplay adaptations by Bradbury himself. The book has been years in the making, after an abortive first attempt to bring it to market by another publisher. Subterranean's shipping announcement is here, and their page about the book is here.
Posted by Phil at 10:00 am No comments:

Email ThisBlogThis!Share to TwitterShare to FacebookShare to Pinterest
Labels: Subterranean Press, The Martian Chronicles, The Stories of Ray Bradbury

British SF novelist Richard Morgan has blogged about how he sees himself as a "Jim Nightshade" writer - comparing his sensibilities to the Bradbury character from Something Wicked This Way Comes. I haven't read any of Morgan's work, but this makes me want to.

Another list featuring Bradbury: this time it's twenty-one creepy babies from film and TV. Bradbury appears thanks to "The Small Assassin", specifically the Ray Bradbury Theater adaptation of the short story. View the twenty-one here - and view my review of that episode here. I also have a review of the 2006 short film based on the same story, here.

This last item isn't new, but I stumbled on it just recently and thought I would link to it here. On NASA's website they have the full text of a small book called Why Man Explores, first published in 1976. It includes a brief essay and poem by Ray Bradbury, as well as writings from James Michener and Jacques Cousteau. The full text is here.
Posted by Phil at 10:00 am No comments: 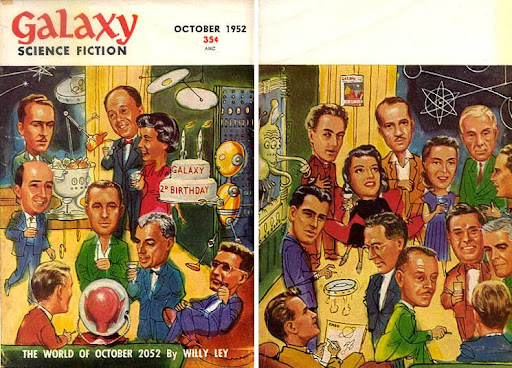 The original page is here.
Posted by Phil at 10:00 am No comments:

British-born actress Lynn Redgrave has passed away, at the age of 67. Her stage, film and TV credits were extensive, and include at least one Ray Bradbury film, Walking on Air (1986) .

Her career is summarised well in this Telegraph obituary.
Posted by Phil at 9:16 pm No comments:

Email ThisBlogThis!Share to TwitterShare to FacebookShare to Pinterest
Labels: PBS, Walking on Air

The re-packaging (some might say exploitation) of The Ray Bradbury Theater continues. The original DVD box set of the series contained all the episodes, some of them with their rarely seen episode-specific Bradbury introductions, but with too many episodes crammed onto too few discs. The result: poor quality image and sound and way too many compression artefacts. Still better than most of my aged off-air VHS recordings of the show, however.

And so came a re-release, this time in a "collector's tin". What an honour for a writer to have his work presented in a tin!

Now comes a reduced version of the series: a mere sixteen episodes are included on the latest re-package. Looking at the list of episodes, it could be argued that they have picked the better episodes...but I've a feeling that any random selection of sixteen episodes could make a similar claim. What they clearly have done is pick the episodes with the biggest stars - and so Shatner, Goldblum, Nielsen and Barrymore get their 1980s faces on the cover, although Nielsen will probably not be pleased to see his name mis-spelled (click on image above for larger view of this typo).

What I would welcome is a new transfer of the episodes, and some DVD extras such as a making-of documentary. This new package offers none of that. I would recommend picking up a discounted (or used) version of the original box set, rather than spending good money on this reduced content re-box.

In lieu of a "making of documentary", you could read my pages on the making of the series...
Posted by Phil at 10:00 am No comments: