To make it easier for people to discover my Bradbury 100 podcast, you'll periodically see this page, which gathers all the episodes and shows together.

Episode 17 - with highlights from two centenary events: Bradbury 100 Live and The Martian Chronicles at Seventy

And the best way to never miss an episode is to subscribe.

As I was giving Bradburymedia a tidy up, I was quite shocked to discover that it's a whole year since I did any of my Lockdown Choices posts!

I started them during the 2020 lockdown, as a way of contributing something to the Bradbury centenary year - because many of the events planned or proposed for 2020 were cancelled or postponed. So I started working chronologically through Bradbury's books, giving a potted history of each one and passing on my recommendations of which stories are worthy of your time.

Looking back, I see that I managed eleven of these posts, all of which were adopted (with permission) by the official Ray Bradbury website, which is run by the Bradbury estate.

It was never my intention to stop at eleven; it's just what happened. Around that time I got swamped with university work, and when I emerged from that I was off and running with my Bradbury 100 podcast. Somehow, I never quite got back to continuing the lockdown book reviews. Maybe I'll pick it up again this summer...

I don't think I ever pulled all of the Lockdown Choices pages together in one place, so I'm going to make amends below. I have, by the way, now inserted my Bradbury 101 videos into the relevant pages, so everything ties together.

One of the most useful features of my website is the Ray Bradbury Short Story Finder. It lets you find out which books contain any given story, and where each story made its first appearance.

And I've extended the "Eller References" This is the unique numbering system devised by bibliographer/biographer Jonathan R. Eller: each story receives a two-part numeric code, where the first part denotes the year of first publication, and the second part indicates the publishing sequence within the year. Eller's system is used systematically in the book Ray Bradbury: The Life of Fiction, and several years ago Jon very kindly gave his permission for me to use the same system here. What I've added today is some additional Eller References which extend beyond The Life of Fiction.

I hope you continue to find the Short Story Finder useful!

A Fresh Lick of Paint...

I wonder how many visitors to this site realise that there is more to it than the blog. Do you ever go to the sidebar?

You know, the sidebar: 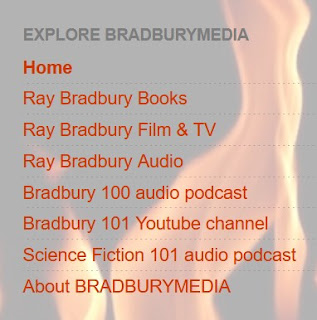 Unless you're on a phone, in which case it might be hidden under the three dots somewhere...

Anyhoo, I've just re-done the sidebar to add direct links for my associated activities - the podcasts and the Youtube channel. And if you care to explore the Ray Bradbury Books section (for example) you will, I hope, see that I've updated the banner on all pages. At least, I think I have. But I've probably missed some pages.

If you spot anything missing, banner-wise, do please let me know in a comment.

What's that? Superficial, you say? Yes, I'm afraid all I've done is added a lick of paint. But the underlying cracks remain, watching to be patched-up another day...

Time for another episode of my Youtube series Bradbury 101.

We've now reached the year 1953, and the release of Ray Bradbury's first true novel, Fahrenheit 451. Except...

The first appearance of Fahrenheit was actually a collection rather than a novel!

Confused? You will be! Watch and learn below.

You can find out more about Fahrenheit 451 from my blog post on the book, here: https://bradburymedia.blogspot.com/2020/04/lockdown-choices-issue-5-fahrenheit-451.html