Martian Chronicles director Michael Anderson has passed away, at the ripe old age of 98.

Anderson's long career in film included a number of landmark works: The Dam Busters, 1984, Around the World in Eighty Days and Logan's Run among them.

When Ray Bradbury's The Martian Chronicles was being adapted for TV in the late 1970s, Bradbury provided the producers with his list of preferred directors. Anderson was on the list, but according to Bradbury was a long way down the list. Unfortunately, Anderson's direction of the eventual miniseries was not stellar, and certainly not consistent with his reputation for helming complex spectacle. On the contrary, The Martian Chronicles was visually pedestrian, and the performances lacking in dramatic impact. Ray Bradbury famously described the miniseries as "boring".

It is proper, therefore, to remember Anderson primarily for those earlier works. The Dam Busters is a British classic, and is close to the heart of many British viewers, both the older generation who saw it on first release, and younger generations who have seen its many appearances on TV. Around the World in Eighty Days, for which Anderson received an Oscar nomination, remains a colourful spectacle, despite its flaws. And while 1984 isn't a patch on the BBC TV production by Nigel Kneale and Rudolph Cartier, it's still a bold early attempt at dystopia, paving the way for Anderson's later box office success with the dystopic Logan's Run.

Having said that, The Martian Chronicles is set for a BluRay debut later this year, which will no doubt draw fresh critical attention to it. 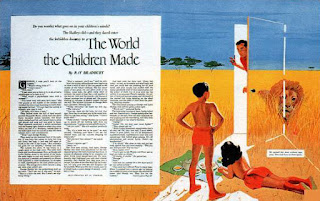 Ray Bradbury's classic tale 'The Veldt' - one of the most influential early virtual reality stories - continues to impact on real life. According to the Los Angeles Times, the Madison Square Garden Company is planning two new 'sphere arenas' in Las Vegas and London. Chairman James L. Dolan publicly referenced the Bradbury story in a presentation about the planned entertainment venues, which will feature the equivalent of 42 IMAX screens linked together, forming the most colossal display screens in the world.

I have blogged about 'The Veldt' many times over the years (click here!), since it is one of the most frequently adapted of Bradbury's stories. I find it curious that it can both inspire real-world creative technologies and serve as a warning about such technologies.

Many thanks to Steven Paul Leiva for drawing this article to my attention.
Posted by Phil at 5:32 pm No comments:

Kino Lorber have announced that the 1980 miniseries adaptation of The Martian Chronicles is set for a BluRay release on 26th June. The series - scripted by Richard Matheson and starring Rock Hudson - has been released on DVD before, but is new to the HD format.

Ray Bradbury had little direct involvement with the miniseries. He had spend a couple of decades trying to get the Chronicles on screen, writing several screenplays in the late 1950s and early 1960s. The Matheson teleplay that was eventually used is pretty good, but the miniseries suffers from lacklustre direction from Michael Anderson (whose previous films include The Dam Busters, 1984, and Logan's Run. At the time of the original TV broadcast, Bradbury went on record as saying that the miniseries was 'boring'... which earned him a reprimand from the producers and the network.

The last time I watched any of the series, I was struck by the slow pace of the first episode, and the appallingly cheap special effects. For a post-Star Wars production, this is unforgivable. It does have some good sections, however: I've always liked the treatment of 'The Martian', the episode where a shape-shifting Martian is able to take on the appearance of any human's loved one. The adaptation incorporates elements from a non-Chronicles Bradbury story, 'The Messiah' - and idea which came from Bradbury himself.

I don't know that there's much to be gained from a BluRay treatment. The miniseries was shot and edited on 35mm film, so there is a theoretical improvement in an HD scan. But I fear BluRay will just make the FX strings more visible than ever...

Congratulations to my friends and colleagues at the Center for Ray Bradbury Studies who were today awarded $50,000 from the National Endowment for the Humanities (NEH).
The grant is for the preservation of the Center's extensive collection of Bradbury papers and memorabilia - materials which have been invaluable in my research, and will continue to be of interest to Bradbury scholars in the future. The project lead is Prof Jonathan R. Eller, author of Becoming Ray Bradbury and Ray Bradbury Unbound.

The announcement from the NEH mentions the Bradbury project in the same paragraph as an unrelated project on Mae West, an amusing juxtaposition:  https://www.neh.gov/news/press-release/2018-04-09

As the air date of HBO's new adaptation of Fahrenheit 451 approaches, a second trailer has been released. This one shows us much more of Montag's world: a clear distinction between text in electronic media and text in printed books; something of Beatty and his motivations; and a hint of the underground which Montag becomes a part of. There are strong hints of Nineteen Eighty-Four and a touch of Blade Runner. And, as always, the footage of books burning looks astonishing - just as Truffaut found in his 1966 film, the horror of book burning is paradoxically beautiful to watch.