Exclusive! Preview of the new journal

Courtesy of William Touponce, director of the Center for Ray Bradbury Studies at Indiana University, comes this exclusive sneak preview of the forthcoming new journal The New Ray Bradbury Review:

The cover artwork (click on it to enlarge) is by Bradbury himself. Inside is a collection of articles by various Bradbury scholars, most focusing on this issue's topic of "adaptation". Here's the table of contents:

Among the contributors (click to enlarge) you may notice Profs Eller and Touponce (co-authors of Ray Bradbury: The Life of Fiction), David Mogen (author of Ray Bradbury), Terry Pace (who has long been associated with Bradbury's work in theatre), and film scholar John C. Tibbetts. Oh, and yours truly has managed to sneak in there with some material on Bradbury's work in the audio media.

The eagle-eyed reader may notice that, although this is a brand new journal, the cover indicates it as "Volume 2". This, says Bill Touponce, is a nod to William F.Nolan, who published the pioneering original Ray Bradbury Review some years ago, and who contributes the preface to this new journal.

As yet, there is no information on how to obtain the journal. As soon as this is decided, I will post the information here. 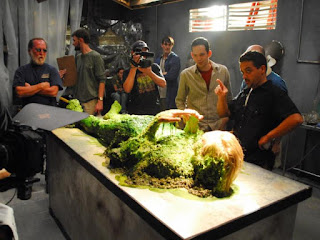 Urban Archipelago Films, producers of 2005's short film A Piece of Wood, have announced their new feature film, Ray Bradbury's Chrysalis. Producer Roger Lay Jr kindly supplied this behind-the-scenes photo (click to enlarge) from the first days of shooting. It tantalisingly gives a glimpse of the special effects which will be key to the concept of the movie. To the right of the photo is director Tony Baez Milan, with producer Lay next to him.
Roger recently spent some time with Ray Bradbury, showing him the work on the movie so far. Both Roger and Ray seem pleased with the movie thus far: 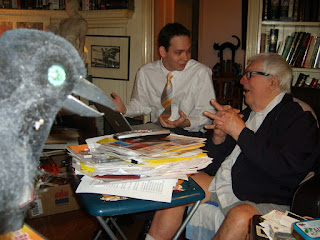 "Chrysalis" was first published in Amazing Stories in 1946, and has appeared in only one of Bradbury's books to date, S is for Space (1966). Back in '46, the story didn't even make the cover of Amazing Stories...

...and it must be one of Bradbury's least re-printed stories. It's pleasing to see a lesser-known piece being filmed, instead of further attempts to film already familiar tales.

Urban Archipelago have a web site for documenting Chrysalis, which you can view here. The most interesting content on the site so far is the conceptual art by D. Hirajeta (click on "gallery" to view).

Here is what Urban Archipelago have to say about the new production in their official press release:

A compelling thriller that transcends both time and space, RAY BRADBURY’S CHRYSALIS is based on the short story written by BRADBURY, the acclaimed writer of such literary classics as FAHRENHEIT 451, THE MARTIAN CHRONICLES and THE ILUSTRATED MAN. The short story was originally published in 1966 as part of the science fiction anthology titled S IS FOR SPACE.

It is precisely Mr. Bradbury's legendary body of work and his numerous contributions to the literary and film industries that solidifies the world-wide appeal for this project.

The script for CHRYSALIS has been developed under the master's guidance and it is the second collaboration between Urban Archipelago Films and this legendary author.

The first product to come out of the filmmakers and Bradbury's joint forces was the critically acclaimed short film A PIECE OF WOOD. The short film has been playing in film festivals nation wide since its Premiere in November of 2005 and is currently available ON DEMAND through AT&T Digital Cable via ILLUSION TV.

In the great tradition of past works of literature from one of America’s most revered storytellers, CHRYSALIS presents a compelling exploration into human nature.

In the future: The world is ravaged, a third world war has left our planet in a state of decay. In a research facility a handful of scientists research ways to sustain plant life. Scientist Benjamin Rockwell has been called to this decaying research facility. One of the scientists there, Smith, apparently has died. Smith lies on a table, his body transformed, his eyes and mouth grown shut. After getting over the shock, and completing an examination, Rockwell realizes that there is still a pulse within Smith...

His body continues changing...a Chrysalis has grown around Smith in order to protect him.

Now in earth’s darkest hours these scientists must figure out what mysteries lay inside the CHRYSALIS.

CHRYSALIS is a thriller with a science fictional background and glimmers of hope from the beginning. There is action, as the characters turn against each other’s beliefs at the edge of a world that slowly disappears before they can discover ways to stop or prolong the planet’s demise. Are they struggling hopelessly, trying to reach goals that may be unattainable?

The debate of science vs. faith is explored as the characters struggle with their beliefs, their doubts, their dreams, and their fears. Can human beings change the course of nature? Could nature intervene as the world is effectively destroyed? Is the world worthwhile? In the darkest hours, would humans deserve another chance?

The film is produced by Roger Lay, Jr. and directed by Tony Báez Milán. Cheyenne Pesko is the editor and post-production supervisor. Gabriel Diniz serves as director of photography with production design by Gladys Rodriguez. Music is composed and conducted by Brandon Moore

Some of Romaire's recent credits include the TNT series NIGHTMARES AND DREAMSCAPES, based on the short stories of Stephen King as well as the HBO hit Drama series SIX FEET UNDER, for which the team was awarded an Emmy award for outstanding make up effects (prosthethics).

Principal photography on RAY BRADBURY’S CHRYSALIS is set to take place on multiple sets at the Broadcast Production Services Stages in Hollywood with second unit photography in the northern California dessert and the rainforest of El Yunque in Puerto Rico.