Time for another all-new episode of my audio podcast Bradbury 100. This week I'm joined by filmmaker and visual effects artist Christopher Cooksey to discuss the challenges and joys of bringing Ray's work to life in the visual realm.

Christopher is the co-producer of Bill Oberst Jr's stage production Ray Bradbury - LIVE (Forever). Ostensibly a one-person show, it's really a visual feast. Bill, alone on stage (except for one dance scene), is nevertheless able to walk around Bradbury's world with the aid of visual projections and audio effects. This video, from Christopher's Youtube channel, shows some of the work that went into making the visuals for the show.

To put Bill and Christopher's work in context, in the first part of the podcast I talk about Bradbury's own use of audio-visual elements in his stage plays. You can find Ray's plays in print in a number of books. Dramatic Publishing carries nearly all of them for would-be performers and play producers, and there are some play collections aimed at general readers. The introductions and production notes in these are often as entertaining as the plays.

And now, enjoy the episode:

As we approach 22 August, Ray Bradbury's birthday, we come to the end of Bradbury's centenary year. To mark the occasion and to close out the year, I have a new miniseries of Bradbury 100 podcast episodes!

Over the next few weeks, you can hear interviews with scholars, artists and performers who have all worked with Bradbury material. But we start the series with a super fan: Pavel Gubarev.

Pavel's Russian website at www.raybradbury.ru is an extraordinary piece of work. It predates Bradburymedia by a good few years, and in its early days it was one of the best Bradbury websites even for non-Russian fans. In those days, it did have a fair bit of English-language content, although today it is largely monolingual.

Pavel is a fascinating guest. Not just a webmaster, he is also an award-winning author. And his unique experience of spending his formative years in the Soviet Union, and then in Russia, gives him great insight into Bradbury's popularity in Russia.

Pavel once created an English-language tribute to Bradbury on a website called Immersion. For this site he collaborated with fans from various countries to produce introductions to Bradbury's work. Although the site itself is no longer extant, a version of it can still be accessed via the Internet Archive.

In this episode of Bradbury 100 I talk about the arcane Soviet copyright system,  and mention a Mikhail Iossel article from the New Yorker.

You can find Bradbury 100 through your podcast app, or you can listen the latest episode below. I hope you enjoy it. 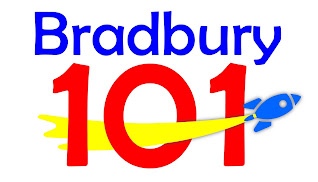 Coming soon, to a podcast app near you:

I have several interviews "in the can", and will be dropping the episodes every weekend for the next few weeks. The first will appear on this blog tomorrow (Saturday 24h July 2021).

Look for it here, or on your podcast app.

The first interview guest of the series will be Pavel Gubarev, award-winning writer and creator of the remarkably popular Russian-language Ray Bradbury website.
Posted by Phil at 7:58 pm No comments:

Email ThisBlogThis!Share to TwitterShare to FacebookShare to Pinterest
Labels: Bradbury 100

The Screaming Woman on Blu-ray 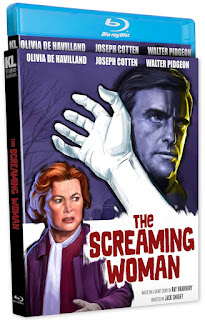 In 1972, there was a TV movie based on Ray Bradbury's short story "The Screaming Woman". It was directed by Jack Smight, who had earlier directed another Bradbury-based film, The Illustrated Man (1969). The TV movie has been difficult to get hold of for years, although it keeps popping up on YouTube, probably illegally. But later this year, it receives an official home-media release, with a Blu-ray edition.

Bradbury's original story centres on a young girl, and when Bradbury later adapted it himself for The Ray Bradbury Theatre in the 1980s, the starring role went to a young Drew Barrymore. But the 1972 version - which Bradbury was not involved with - recasts the central role to an adult woman, with the legendary Olivia de Havilland taking that role. In fact, the TV movie sounds like something from an earlier age, since its other key cast members are Golden Age Hollywood stars Joseph Cotten and Walter Pidgeon.

It's a decent enough TV movie, and a reasonable expansion of the Bradbury story, given that it needs a lot more added plot to bring the Bradbury short up to feature length. It was shot on 35mm film, so should stand up well to a Blu-ray presentation. I have my fingers crossed that the release will be an untampered-with 4:3 scan, and not some misguided attempt to re-format it for modern 16:9 TVs.

The Blu-ray comes from Kino Lorber, who are renowned for bringing obscure classics back into the light. They promise a commentary from leading fantasy media writer Gary Gerani. It should be out in early October, so this might make a neat addition to your Bradbury Halloween screening roster...