Further to my previous blog mentioning the remains of the Fahrenheit 451 monorail, some more ruins to ponder. This time, the remains of Venice, California, which have had a considerable impact on Ray Bradbury.

As far I am aware, the first declared influence was on Bradbury's short story "The Fog Horn", the 1951 tale of a lighthouse destroyed by a lonely dinosaur. The story was the basis of the 1950s monster movie The Beast From 20,000 Fathoms. So where is the Venice influence? The dinosaur itself! In a frequently recounted anecdote, Bradbury tells how he saw the remains of the Venice Pier rollecrcoaster, and imagined it to be the skeletal remains of a dinosaur. Freewheeling from there, he asked what would lure such a creature to such a place. A lighthouse, of course!

But Venice has had more than one story's worth of influence on Bradbury. Much of the carnival imagery of his early stories is likely to have been influenced by the carnival-like Venice, California, which Bradbury probably first visited in the late 1930s when he was in his teens.

Later in life, Bradbury makes explicit use of Venice, its pier and derelict canals in his 1985 novel Death is a Lonely Business. Indeed, his depiction of the town influenced the cover art of several editions of the novel - there are some examples here.

There are more images of Venice in its prime and in decline in the online photo collection of the Los Angeles Public library. Click here to see a selection.
Posted by Phil at 9:12 am No comments: 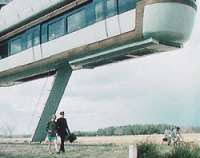 I've been making new finds of old stuff on the web, most of them thanks to Google Alerts. Here are some curios that have just come to my attention.

Ever wondered what happened to the monorail Montag used to get home in Truffaut's film of Fahrenheit 451? It was a real monorail in France, built as a protoype, and Truffaut chose it because of its futuristic appearance.

The monorail is no longer in existence, but a few years ago some monorail enthusiasts tracked down what remains of the system, including the vandalised car and some sections of track. Find out more by visiting Randy Lambertus's page from 1999.

Going back to 1993, we find Ray Bradbury being interviewed about his alleged total recall. This unlikely gift is what allows him to remember the moment of his own birth. No one really believes this claim, but his belief in it led him to write one of his classic short stories, "The Small Assassin". Bradbury has discussed this in many interviews, but this one from YouTube is one I hadn't seen before. It's from a Canadian TV show called Prisoners of Gravity.