Time for another new episode of my podcast, Bradbury 100.

This week, my guest is photographer
Elizabeth Nahum-Albright. Elizabeth is the daughter of Donn Albright, Ray's longtime bibliographer. Ever since she was a child, Elizabeth knew Ray, and would visit his house when Donn made the cross-country trip from east coast to west coast.

Elizabeth's current show - "I Saw It At Ray's House" - is a photo exhibition consisting of photos taken in and around Ray Bradbury's Los Angeles home. Some of the photos date from those childhood visits, but most of them are from later years, with a large number showing the house and Ray's effects after he had passed away.

The exhibition debuted as a physical exhibition in New York a few years ago, and was re-staged at Indiana University-Purdue University Indianapolis after that. Because of Covid-19, a planned 2020 physical exhibition at Tribeca's Soho Photo Gallery has been replaced by an online exhibition. This is the first time the whole exhibition has been made available online. The photos are fascinating, but not without a tinge of sadness. There is a link to the exhibition below, in the show notes.

Because of the "Ray's house" theme of the exhibition and my interview with Elizabeth, I decided to make Ray's house(s) the theme of this week's podcast.

I referred to the Shadow Show comic, and its adaptation of Sam Weller's story "Live Forever!" Here is one page from the comic, showing the little (or big!) yellow house: 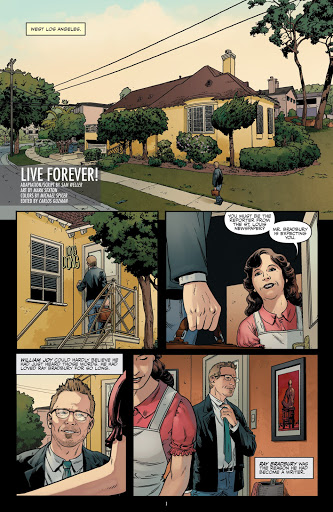 You can buy this issue of the comic directly from IDW.

Elizabeth Nahum-Albright's exhibition "I Saw It At Ray's House" can be viewed here until the end of August 2020.