A Piece of Wood

Several weeks ago I got to see the short film A Piece of Wood, thanks to producer Roger Lay Jr who kindly sent me a review copy. You can read my review of the film here.

Roger and director Tony Baez Milan tell me they are in negotiations for a feature film with a Bradbury connection. I know nothing else about this project, but am hopeful that they will soon be able to tell us more...
Posted by Phil at 10:03 pm No comments:

Bradbury 13 news? And a Bradbury documentary. 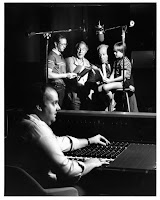 A company called Strategicom have contacted me, saying that they are working with Mike McDonough on licensing of Bradbury 13. It sounds as if moves are afoot - finally - to get this classic piece of radio drama officially re-released.

As I have blogged previously, Bradbury 13 (most of it, anyway) was once released on cassette, but a CD or official download version has never appeared. I hope this is now about to happen. Watch this space!

Meanwhile, I spotted a new Bradbury documentary DVD on Amazon. Ray Bradbury: Dancing Among the Muses sounds, from a customer review, a rather cheap affair. However, the producers' web page for the DVD makes it seem rather more professional. They have a trailer online (which friend Nard also found on YouTube), which includes Ray telling the familiar Mr Electrico tale. This might be worth further investigation...
Posted by Phil at 8:55 pm 1 comment: I can't get there myself - on account of a few thousand miles of ocean being in the way- but the short film adaptation of "The Small Assassin" is shortly to be premiered.

I have some information and links on the film here.

The film is being shown as an evening of shorts from Beverly Ridge Pictures in Chicago, Illinois.
Posted by Phil at 8:01 pm No comments: