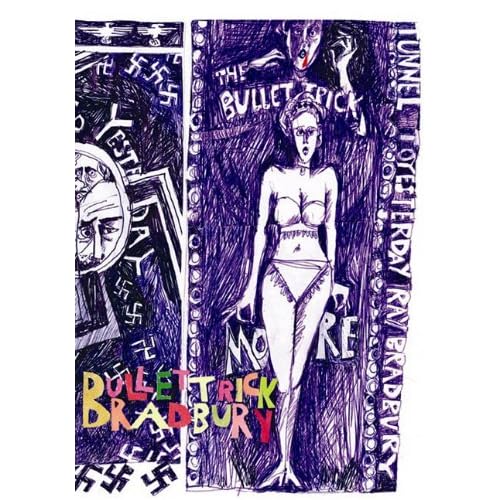 More unpublished items are finding their way out of the Bradbury archives and into publication, and the latest trend seems to be unpublished screenplays. Bullet Trick is already out from Gauntlet, collecting several of Bradbury's television scripts ("Dial Double Zero" and "Bullet Trick" among them), and 2010 should see the long delayed Martian Chronicles volume from Subterranean Press, which will contain some of Bradbury's unpublished and unfilmed Chronicles screenplays.

And now comes news of more screenplays from the archive. Gauntlet has announced Dawn to Dusk: Cautionary Travels, which will collect for the first time the original Dark Carnival screenplay - written for Gene Kelly in the 1950s, and based on Bradbury's short story "Black Ferris", this was later converted by Bradbury into the novel Something Wicked This Way Comes... and subsequently converted back into a screenplay for the 1982 Disney film based on the novel!

I had the privilege of inspecting a copy of the Dark Carnival screenplay in the Center for Ray Bradbury Studies in Indianapolis earlier this year. It differs substantially from Something Wicked, but is also recognisable as essentially the same work. What interested me was Bradbury's screenwriting style, as this was written quite early in his screen career. His descriptive powers were arguably at his peak at this stage. His screencraft may not be as well developed as it would become later, but he certainly knew how to write clearly and evocatively for the screen.

Dawn to Dusk will also include Bradbury's screen adaptation of "The Next in Line", one of his better Mexican stories, and "Interval in Sunlight". The publication date is "fall 2010".