In these days of globalisation, it is easy to assume that British and American culture are in sync, and that they always have been. A book published in the States is often published simultaneously in the UK. It therefore always comes of something of a surprise to me to find British references to Bradbury from the 1950s, 1960s and 1970s which seem out of step with American references.

I was reminded of this when I caught sight of a 1965 edition of New Worlds magazine. This used to be the UK's leading science fiction magazine, edited first by Ted Carnell and later by Michael Moorcock. The issue of December 1965 - a quite ordinary, run of the mill issue really - carries the name of Langdon Jones on the cover, because his short story "Transient" is contained within. But Jones makes a second appearance in this issue, as a reviewer of the first British paperback edition of Bradbury's Dandelion Wine.

What surprised me here was that the first UK paperback edition took until 1965 to come into print... of a book first published (in the US) in 1957!

Jones' comments on the book are quite insightful, and he puts up a spirited defence of Bradbury. The book is sentimental, says Jones; it is nostalgic; it is escapist. But, he says, these are not bad things in themselves, and in case, he says, "the world of Green Town, Illinois, is not a place of smug sweetness. There is horror here too, the horror of the Lonely One [...]; the horror of losing touch with close friends; the horror of being old and of suddenly losing the whole of one's youth." 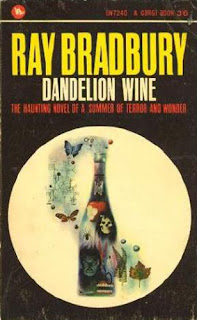 My favourite section, though, is where Jones clearly marks out who should and should not read this book:

There are, as I have discovered, some very, very literal people in this world. Those who would rather spend their time crabbily counting up the halfpennies of logic whilst ignoring the fluttering riches of meaning, I advise to keep well away from this book and this author. Those who would prefer the transparent but sweaty engineer working frantically on his logical machinery while blue-scaled Venusian lizards batter down the papier-mache door will not feel at home in Green Town with its solid, but distorted perspectives.


Langdon Jones seems to have retired from writing - his website tells us that he "used to be" a writer. He used to be a very good one, and I wish he wrote more.
Posted by Phil at 8:00 am