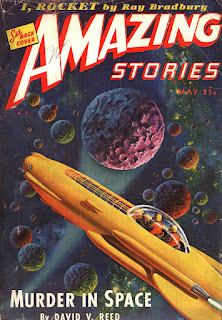 Bradbury is known as much for his style as for his plots. One of the things that makes his short stories interesting is his willingness to try out new stylistic ideas and techniques.

While most of Bradbury's stories are written in the third person ("he did this", "she did that"), Bradbury quite often adopts the third person, writing as "I". Perhaps his most sustained writing in this mode is in the trilogy of mytery novels starting with Death is a Lonely Business (1985), whose narrator appears to be modelled closely on Bradbury himself.

Among Bradbury's stranger forays into the first person are those stories with a less familiar or less likely narrator. A Mermory of Murder (1984) includes a story narrated by a dead man.

Oddly, the story has never been collected in a Bradbury short story collection, although it has made the odd anthology appearance. Its first publication was in the pulp Amazing Stories in May 1944, where it was accompanied by an illustration by the artist Brody (below - click on the picture to enlarge). 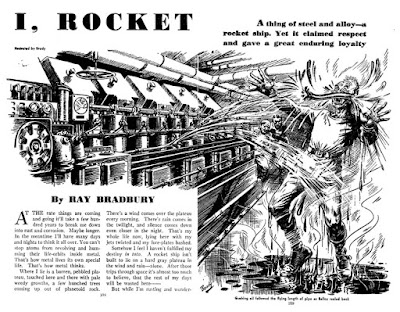 The narrator of this story sees everything in terms that would make sense to a rocket ship, and will thank Metal where we might thank God. So much is straightforward and probably no better than you or I would come up with if asked to write a tale from the point of view of a machine.

What is more remarkable is Bradbury's adoption of numerous biological metaphors throughout the story. There is talk of the ship being built, but not really coming alive until "the slap on the back to give me strength and directed purpose," and reference to its birth period when "I was integrated, skeleton, skin and innards." Then there are people, who are variously referred to as blood cells and microbes:


The microbes within my body were in a small dosage; but virulent because they moved free, unchecked, unsuspected. Their names were Anton Larion and Leigh Belloc. I refer to them as bacteria simply because, like microscopic forms in a large body, their function was to poison and destroy me.

Not many writers can make you feel sympathy for a war-ravaged space hulk the way Bradbury does here.
Posted by Phil at 10:30 am