I've been way to busy to blog just lately, but had to break the silence to comment on two events of this past week.

The good news is that The New Yorker has just published a special science fiction issue. After decades of ignoring the genre, it has now decided that there is something worth investigating. There are items in there from Ray Bradbury, Ursula LeGuin, China Mieville and Margaret Atwood, which in a way suggests a fairly good sensibility about the genre: a couple of classic writers from within, but whose reputations have spread beyond genre boundaries; and a couple of more recent writers who have figured in a lot of debate about those boundaries.

Then they go and spoil it all, by saying something stupid like "sci-fi".

I haven't actually laid hands on the issue yet, but the table of contents (and some sample content) is available on the New Yorker website. Incidentally, the last time The New Yorker published an item with the byline "Ray Bradbury" was in 1947, when they premiered Bradbury's short story "I See You Never". The story was later selected for Best American Short Stories, and is these days familiar as a tale from The Golden Apples of the Sun.

The second event I want to comment on is the sad news of the passing of the artist Leo Dillon. Leo and his wife and collaborator Diane are best known for their illustrations for children's books and for science fiction and fantasy stories. For Bradbury, they illustrated his children's story Switch on the Night, and a number of other projects. There is a collection of Dillons/Bradbury images at the Art of Leo and Diane Dillon blog. 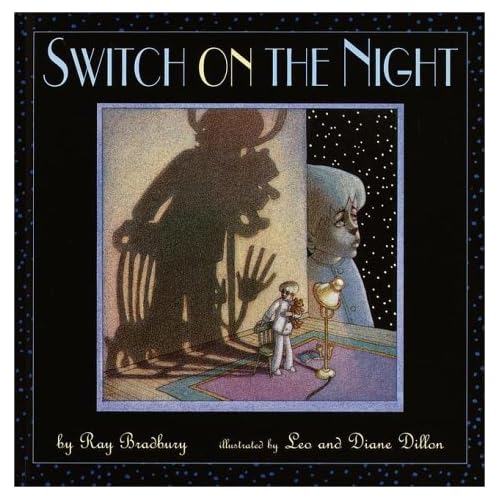 The Dillons are also, for me, inextricably linked to the work of Harlan Ellison: they illustrated the covers of his books quite extensively, as you can see from this collection of images on the Art of Leo and Diane Dillon blog. Leo's most recent work for an Ellison story was on the Dillons' illustration for Ellison's Nebula Award-winning short story "How Interesting, A Tiny Man":


I had often wondered about how Leo and Diane approached their collaborations, and indeed what motivated them to collaborate in the first place. Some answers are given in the New York Times obituary for Leo, which tells a fascinating story of two artists who started out as rivals, only to later find that their combined talent was greater than the sum of its parts.
Posted by Phil at 8:45 pm No comments: