I'm very late in reporting this, but better late than never!

On 18th September, Los Angeles City Council voted to name an intersection Ray Bradbury Square. The intersection is of Fifth Street and Flower Street - click here to view it on Google Maps. You can read a brief account of the council proceedings here.

Three key figures in this renaming were Steven Paul Leiva (co-ordinator of 2010's Ray Bradbury Week in Los Angeles), Sue Bradbury Nixon (Ray Bradbury's daughter) and Jose Huizar (LA Councilmember). The three are pictured together after the event in this photo from Steven's Facebook page: 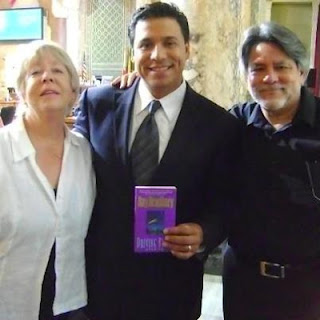 Steven has also posted a transcript of Sue's comments to the Council, which I would like to reproduce here:

First of all, I’d like to thank the many councilmembers who worked on, and supported, the motion to name the intersection of 5th and Flower, near the Los Angeles Public Library, Ray Bradbury Square. My father would be so proud to be honored in this way.


My father moved to LA in 1934, with his family, in the middle of the Great Depression. My grandfather was looking for work and they ended up living in Boyle Heights. After my father graduated from LA High School there was no money for college, so Daddy found himself several days a week reading anything and everything he could lay his hands on at the Central LA Public Library. As my father mentioned so many times in his lectures, the library was his university.

Along with the LA Public Library, the City of Los Angeles molded Ray Bradbury into the man, and writer, he was to become. LA featured in several of his stories, like “The Pedestrian” and “The Wonderful Ice Cream Suit”.

Daddy didn’t just take from Los Angeles, he also gave back to the city that he loved. In 1963 he worked with the Board of Supervisors on a rapid transit monorail system, which, unfortunately, was never approved. He worked as a consultant on the Hollywood and Highland commercial development. My father was always urging more pedestrian-friendly areas and more open-air shopping areas and restaurants with outdoor seating since our weather is so fantastic.

But I think my dad’s proudest accomplishment was to keep some of LA’s struggling libraries open. He would lecture at the libraries for free, with any admission charges going directly to the library. To him, keeping the libraries open, with their contents available to everyone, was so important. He was concerned that without everyone’s support, the libraries would close.

I can’t think of a better way to honor my father’s memory and legacy than to name the intersection of 5th and Flower, near the Central Los Angeles Public Library, Ray Bradbury Square.

If you haven't already seen Steven's own photographic record of 2010's Ray Bradbury Week, it's well worth taking a look. In some ways the naming of this intersection is the culmination of that week of celebration. Steven's photos and account are here.