Halloween. Bradbury season. A good time of year to (re-)read Something Wicked This Way Comes, The Halloween Tree and The October Country...

And a good time to receive the news from award-winning radio dramatist Brian Sibley: that he has been commissioned to write a radio dramatisation of Bradbury's The Illustrated Man. It is to be part of a short season for BBC Radio which will also include an adaptation of The Martian Chronicles (written by someone other than Sibley). Brian has considerable experience of working with Bradbury material, having adapted a number of short stories for the series Ray Bradbury's Tales of the Bizarre. A few years ago he was trying hard to get a production of Something Wicked This Way Comes onto the air, but the BBC wouldn't bite. (Shortly afterwards, they did stage a production, but not the Sibley version.)

For Halloween, Brian has also posted something seasonal on his own blog: Death and the Magician is about the life (and afterlife?) of Harry Houdini. Brian, of course, is a connoisseur of magic, and Chairman of the Magic Circle.


Halloween is also a good time to (re-)listen to Colonial Radio Theatre's productions of Something Wicked This Way Comes and The Halloween Tree...

And a good time to reconsider the classic Orson Welles radio dramatisation of The War of the Worlds, now seventy-five years old. 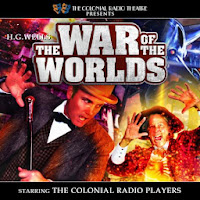 It so happens that Colonial have recently produced their own audio version of H.G.Wells' novel, and in traditional Colonial style they have "done the book". No updating of the story, no attempt to relocate the events of the story to a different country, no attempt to reflect current world or political situations - just The War of the Worlds as H.G. wrote it.

This is something I have always wanted the visual media to do. Although we occasionally see an updating of Shakespeare, for the most part film and TV adaptations of classic literature will attempt to recreate the period in which a work was created, the world in which the story is set. Dickens and Austen are always set in the nineteenth century, so why not adaptations of Wells? George Pal's The Time Machine starts and ends in Victorian London, I suppose, although most of the action is in the far future. There was also a 1980s BBC TV dramatisation of The Invisible Man which was staged as a period piece. But every time The War of the Worlds is done, the aim seems to be be to recreate the effect of Wells' work - to scare the audience by showing a realistic threat - rather than to recreate Wells' actual plotting and staging. This latter is exactly what the Colonial Players have done, in audio.

Jerry Robbins' production, starring British actor David Ault,  takes us back to Wells' text, but not without some creative interpolations. Wells advances his story mainly through a first-person narrator, but the Colonial Players turn much of this into dialogue, especially in the early scenes. This has led to some smart decisions, such as the presentation of Pearson, the central character, as a man who is slowly acquiring knowledge about the Martian invasion. Whereas Wells' narrator tends to sound authoritative - think Richard Burton's classic reading in Jeff Wayne's musical version of War of the Worlds - this Pearson seems to be talking off the cuff at the start, as he recalls the events he has just witnessed. By the end, with the Martians defeated, he reads confidently as he attempts to shake listeners from complacency.

Because M.J. Elliott's script follows the book, the geographical wanderings of Pearson are preserved, giving it a distinct air of authenticity, at least for a Brit like me who has some familiarity with the places named, but the casual dropping of place names with logical consistency should also make it seem authentic to anyone who is not aware of the real places. If you want to get a sense of the very real geography that Wells uses, take a look at this website, which provides maps and photos of some of the key locations.

Somehow, Robbins has managed to collapse the reading time of the novel right down. I have some audiobook versions of The War of the Worlds which give a straight undramatised reading, and they run to about seven hours. This Colonial dramatisation lasts just under two hours, and yet doesn't seem to have cut very much from the story. I put it down to some efficient dramatisation, and removal of some of the more formal sections of Wells' narration. What remains tends to be dramatic material that keeps the story moving forward.

As is so often the case with Colonial productions, the cinematic soundscapes make a strong impression. I was particularly taken with the thumping, piston-like stride of the Martian tripods, and their bellowing, almost subsonic communication. Although it's science fiction, Wells' novel works by being realistic: his Martian war machines are extrapolations of the massive mechanical contraptions which were beginning to appear in real warfare at the turn of the twentieth century, and which within twenty years would bring about the devastation of the First World War. Colonial's sound effects build upon that same kind of technology. When the first cylinders descend, they sound like missiles, weapons of war, rather than Hollywood flying saucers. There is only a modest use of cliche science-fictional sounds, and reliance more on hisses, grindings, thumps and explosions. The best soundscape comes in the scene where Pearson, in the river, goes underwater to hide or escape from the Martians. But the "call to feed", with blood-curdling screams accompanying the bellow of the Martians is quite effective - and quite appropriate for Halloween listening...

I can't finish this brief review without addressing the question of voices and accents. Brits don't sound Americans, and Americans don't sound British, so some very embarrassing results can arise in  productions like this (Colonial Radio Theatre records in Boston, MA). Fortunately, with David Ault at the centre, it is very convincingly British. The secondary characters blend in well, with Joseph Zamparelli's Ogilvy and J.T.Turner's Reverend holding up well.

There's a lot to be said for the Orson Welles eve-of-Second World War version of The War of the Worlds, and even Spielberg's post 9/11 film version from 2005. It's great that Wells' story, anticipating world war and the end of empire, can find modern resonance in updated, relocated renderings of his story. But the genius of Wells was the building of the real and the mundane into an only slightly extrapolated fantasy, and it is this War of the Worlds which Colonial delivers.

If you want to treat yourself to The War of the Worlds this Halloween, you can get it as a download from Amazon or Amazon UK. And you can even get the script for Kindle!

A couple of days ago, David Barnett blogged for The Guardian about Ray Bradbury's non-SF, non-fantasy writing. It's a good piece, picking out a couple of examples from Bradbury's Irish and Mexican stories, and I'm sure the average Guardian reader would be slightly surprised to find that the famous American "sci-fi guy" was interested in non-fantastical tales.

I've never sat and counted, but I suspect that Bradbury's short fiction deals with "the real" at least half the time. It's certainly true that his interest in genres tended to come in waves: first the weird fiction that got him started in Weird Tales, then the detective stories that he ultimately gave up on (most of which are collected in A Memory of Murder), then science fiction (the stories that became The Martian Chronicles and Fahrenheit 451). Then, after the Moby Dick experience, the Irish stories and other "realist" works. However, even among his early works there are realist stories like "I See You Never" and "The Meadow".

Except... while I see the "real" in Bradbury, it's nearly always presented in an unreal way. The Irish stories are not real in any journalistic sense: the characters are exaggerated for comedic effect, or are caricatures of real types that he had met, or are in situations which are enlarged into a tall tale. Other of his "realist" stories from his later career have a dreamlike tone to them - as I've pointed out before, a remarkable number of stories in Bradbury Stories: 100 of his most celebrated tales begin with the narrator waking up, being awoken, or being interrupted.

Nevertheless, for all of the unreality of "The Beggar on O'Connell Bridge" (for example), the story is light-years from being science fiction, or fantasy. In Bradbury's writing there really is a continuous spectrum that runs from complete fantasy to almost real, but most of the time he stays well away from the extreme ends and occupies a middle ground where the real is rendered fantastical, and the fantastic is made real.

'Tis October, and with the witching season soon upon us it is time for the annual Ray Bradbury Storytelling Festival. This event, now in its eighth year, is a celebration both of Bradbury and of the art of storytelling, and it takes place in Bradbury's birthplace of Waukegan, Illinois. It all begins tonight at 7.30pm in the Genesee Theatre. Details are here - and that link also takes you to a video that summarises Fahrenheit 451 in two minutes and thirty-five seconds!

It was sixty years ago today...

On this day in 1953,  Ray Bradbury's book Fahrenheit 451 was published. Strictly speaking, that first edition was a collection of short stories rather than a novel, since it contained not only the title work but two other pieces of short fiction: "The Playground" and "And The Rock Cried Out". Later editions would drop the shorter pieces, allowing 451 to stand on its own.

To celebrate the sixtieth anniversary, as I have reported previously, Simon and Schuster have put out a special edition of the book with new cover art - and with lots of new critical back matter compiled by Jon Eller. Here you will find Jon's account of the origins of Fahrenheit 451, contemporary reviews, and comments on the work from various notables from the book's sixty-year existence. The book also has a new introduction by Neil Gaiman.

Watch out for the remarkably short-sighted lack of promotion from S&S, though. Even their website makes no mention of the substantial content added to this edition, and they didn't even bother giving it a new ISBN number!
Posted by Phil at 4:52 pm 2 comments:

Just released from McFarland is a new book of essays on Ray Bradbury's work. Orbiting Ray Bradbury's Mars, edited by Gloria McMillan, started out with the intention of re-assessing Bradbury as an author with strong Arizona connections, but the book has turned out to have a broader scope.

The essays cover various topic areas: some are biographical, some scientific, some anthopological, some literary. Of particular interest to me are a couple of chapters that deal with the TV adaptation of The Martian Chronicles. Although this is one of the weaker adaptations of Bradbury, it remains one of the best known, and therefore needs some critical scrutiny.

I haven't yet read the book - I only discovered this week that it was actually available via Amazon, much earlier than had originally been advertised. I may write a longer review later, if I find time. On the face of it, though, it's a useful and up-to-date collection of essays. Contributing authors include Jon Eller, Marleen Barr and Grace Dillon. The full table of contents is on the publisher's page, here.
Posted by Phil at 7:00 am 1 comment:

Blink and you'll miss it 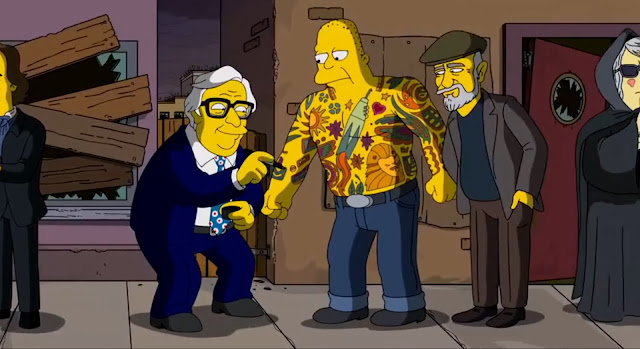 The Simpsons' 24th "Treehouse of Terror" episode - due to premiere this weekend - has an elaborate re-make of the entire Simpsons title sequence. I lost count of the number of familiar SF/fantasy genre references. There's a Bradbury reference in there, but if you blink you may miss it... so here it is, frozen for your extended enjoyment.

Here we see Ray inking up the Illustrated Man. And who's that looking over his shoulder? Richard Matheson?

And now, the full sequence: