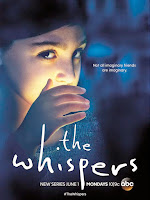 I'm breaking a longish Bradburymedia silence to report that The Whispers has been cancelled by ABC.

The Whispers was the most recent attempt to adapt Ray Bradbury for the screen, taking the premise of his classic short story "Zero Hour" and spinning out into a long-running TV series. As it turns out, only thirteen episodes were made, and in the face of declining ratings ABC decided not to bring it back for a second season.

This, of course, leaves viewers of the series with unanswered questions, principally "what was that all about?"

I watched the first three or four episodes, and although it really had little to do with Bradbury, I thought the plotting had some intrigue, with mystery being piled on mystery. The opening scenes of episode one actually reflected Bradbury's "The Small Assassin" as much as they did "Zero Hour". I have the remaining episodes stacked up, and may get round to viewing them at some point.

It turns out to be a mixed blessing that Bradbury's name was completely left out of the credits. Most casual viewers will have no clue that The Whispers was "Zero Hour". But if any of those are left disappointed by a lack of a solid conclusion, point them to the original short story - which has one of Bradbury's finest endings.

More information on the cancellation of The Whispers can be found here: http://tvseriesfinale.com/tv-show/the-whispers-cancelled-by-abc-no-season-two-38861/