The great science fiction writer, historian, editor and educator James E. Gunn has passed away at the grand age of 97. Jim was still an active professional author, with his Transcendental trilogy being published in the 2010s, and his latest short fiction appearing in Asimov's magazine just this year.

Jim was one of the few surviving writers from the original heyday of science fiction: he had two short stories published in pulp magazines in the 1940s (one in Startling Stories and one in Thrilling Wonder Stories). He was just three years younger than Ray Bradbury and Isaac Asimov.

Back in the 1980s, when I was heavily into science fiction literature, Jim's novel The Listeners was one of my favourite books. Not only did it have a great science-fictional premise - scientists listening out for signals from other star systems - it was clearly informed by what was going on in the real field of SETI, the search for extraterrestrial intelligence. It was a lot less flashy than Spielberg's Close Encounters of the Third Kind, but a lot more convincing.

But where James E. Gunn had the greatest effect on me was with his historical study of origins and development of science fiction. His terrific anthology series The Road to Science Fiction not only told the story of SF, it set out to demonstrate it through judicious selections of text from early, proto-SF through to modern day works.

Seven years ago, I was delighted to meet James Gunn at a conference, and I blogged about it afterwards. I can think of no better tribute than to re-run that blog post. So here it is, from 26 August 2013. 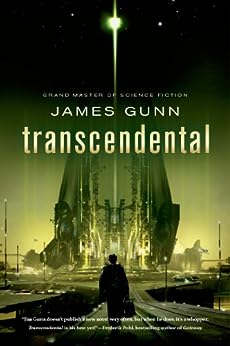