Author Alice Hoffman - writer of Practical Magic and The Story Sisters, among others - has written a short piece for NPR about Ray Bradbury's Fahrenheit 451. "I owe Ray Bradbury a huge debt, one that can never be repaid," she says. Read the article here (I originally linked here, but this link seems to have died.)

California Artists Radio Theatre has updated its website with some photos of the recent performance of Leviathan '99. The production was recorded for future release by CART. See photos of the cast - including William Shatner, Sean Astin, Norman Lloyd, Samantha Eggar, Walter Koenig - with Bradbury and the legendary radio producer Norman Corwin here.
Posted by Phil at 10:07 pm 1 comment:

Bradbury's work is often written about it the US and, to a lesser extent, the UK. But he has a wide readership throughout the world. A remarkable insight into how Bradbury is perceived in Russia can be gleaned from friend Pavel's website, www.raybradbury.ru. I don't read Russian, but just clicking around the links is interesting, and if you have the patience to use an internet translation service, you can read some of the site in sort-of English.

Until today, I knew nothing of Bradbury's reception in Bulgaria. It hadn't even occurred to me that Bradbury would be known in that country. But Young Jedi's Holocron has this fascinating account of Bradbury's critical reception in that country, complete with cold-war era distortions of fact, such as the time that Bradbury's house was burned to the ground. (Don't worry, never happened. But someone in Bulgaria thought it did. Apparently.)
Posted by Phil at 2:31 am No comments: 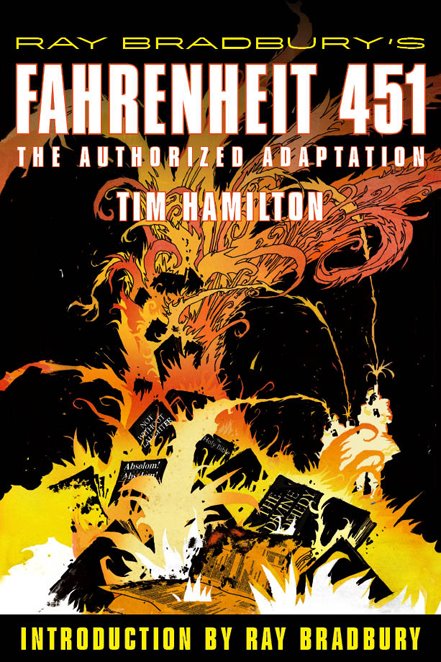 News on a new graphic adaptation of Fahrenheit 451: artist Tim Hamilton has, with Bradbury's approval, been preparing this new version which will get its debut in Playboy, of all places. This isn't such a bizarre place, though; Bradbury's original book-burning tale first saw print in Hefner's adult magazine, as the short story "The Fireman".

Read about the publishing plans in this Publishers Weekly story, and read more in this profile of Tim Hamilton.
Posted by Phil at 3:35 am No comments:

Bradbury's Fahrenheit 451 continues to be a popular choice for theatrical staging. News reaches me of a current production in Goshen, Indiana. Ticketing information is here.

The SouthBend Tribune has a behind-the-scenes article here.

And here's a video clip:


Meanwhile, in Chicago, the Manifest Urban Arts Festival is bringing Bradbury's characters to life. Learn more here - or by watching this video clip:

It's been a good five years since the picture on the left was taken. It shows a meeting between Ray Bradbury and screenwriter-director Frank Darabont, when Darabont was delivering his screenplay for the proposed new film of Fahrenheit 451.

The wheels turn slowly in Hollywood, if they turn at all. IMDB stills lists Fahrenheit 451 as in development for 2010. The last news that came my way was a year ago, when Darabont announced with regret that he was looking for a leading man for the project, to replace Tom Hanks.

If you're wondering what all the fuss is about, the Mystery Man On Film blog has recently posted an excellent article about Bradbury's original novel, Truffaut's 1966 film adaptation, and Darabont's as yet unfilmed screenplay. Read it here.

I have some pages of my own on various incarnations of Fahrenheit 451: you can read about the origin of the book here, and Bradbury's own stage play adaptation (British premiere) here.
Posted by Phil at 8:26 am No comments:

Coming up later this month is a new initiative in New York, called Project 451. Designed to promote literacy, it's being launched at the 2009 Literature to Life Awards. Find out more at the event website and at the Project 451 website. Who thought we would ever watch Meryl Streep read from Ray Bradbury? Here she is: