The Ventura Country Reporter has just published a new interview with Bradbury, which shows his writing habits to be unchanged, despite his eighty-eight years. Mind you, you can't believe everything you read: this article claims that Bradbury still travels the world giving lectures. Not quite. He doesn't venture beyond Southern California these days, because of his health. Anyway, read the interview here.

Update: the New York Times features a similar (but better written, more quirky, more fun) article in its 19th June issue. I am told this was a page one story! 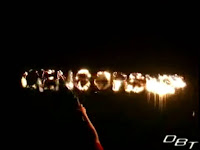 Here's a nice idea - and one I have used with my own Video & Film Production students on occasion: making a trailer for a book!

Digital Book Talk is a literacy scheme from the University of Central Florida. It has synopses and film trailers for lots of books. One such is this neat trailer for Fahrenheit 451, and another for The Martian Chronicles.

The Steve Canyon volume 2 DVD is now on release. This is the second collection of episodes from an old TV series. The significance for the Bradbury fan is that this volume includes the episode that Bradbury scripted, a Christmas tale called "The Gift".

Reviews of the DVD can be found at DVD Talk and Comic Mix.
Posted by Phil at 12:06 pm