The UK first edition of Fahrenheit 451 differed from the US first edition: it contained only the title story, and omitted the other stories "The Playground" and "And The Rock Cried Out". The latter stories would later turn up in Bradbury short story collections.

Such minor differences between UK and US editions are quite common in Bradbury's books, and were there from the outset - even Bradbury's first book Dark Carnival had variant contents. Sometimes differences were prompted by the post-war paper shortage that drove British publishers to keep books short, and sometimes due to Bradbury requesting the opportunity to make changes between publication of the US and UK editions.

Bradbury was significant enough to his 1950s British publishers that they would often feature his books in their newspaper advertising. He rarely got "top billing", but here's one instance where he did: Hart-Davis' ad for the first edition of Fahrenheit 451 (click to enlarge). 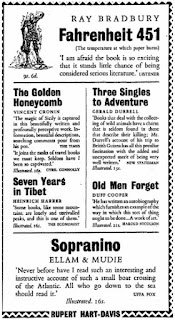 This ad appeared in The Guardian on 9 April 1954, and probably in other publications of the time.

Indicentally, nearly all of the books in this ad are still in print today. The exception is The Golden Honeycomb, which has been out of print for about fourteen years.
Posted by Phil at 8:00 am