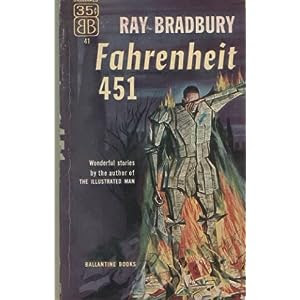 Back in 1953, you could get a hardcover novel for $2.50... or a paperback for 35 cents. Specifically, you could get Fahrenheit 451 for those prices, in the first edition from Ballantine Books.

Strictly speaking, I suppose Fahrenheit 451 was a collection rather than a novel, since that first edition also contained two other stories: "The Pedestrian" and "And The Rock Cried Out".

Among the first reviewers of Fahrenheit was J. Francis McComas, then co-editor of the influential Magazine of Fantasy and Science Fiction. Writing for The New York Times, McComas described the book as "an unsettling experience". He characterised the book as "a polemic: moving and convincing at times, this glum portrayal of a dismal future seldom makes its appeal exclusively to the emotions."

McComas uses some extreme terms, describing the book's "virulent hatred for many aspects of present-day culture" in its depiction of "a grisly world". He does, however, acknowledge the idea as intriguing and not altogether implausible.

Ultimately, McComas finds the world of the novel to be sketchily portrayed, and particularly criticises the lack of detail in accounting for the politics behind the all-out atomic war. He also finds the characters lacking, "spare symbols whose imagined lives are curiously inconsistent with established fact."

I have some sympathy with some of McComas's observations, but I tend to disagree about the atomic war. Bradbury tells the whole story from the restricted viewpoint of Guy Montag, whose knowledge of what goes on in his world is very limited. Montag's understanding dawns slowly, and does so in what immediately surrounds him. His knowledge of government and politics is completely lacking precisely because of the lack of meaningful information allowed to citizens of 451's world.