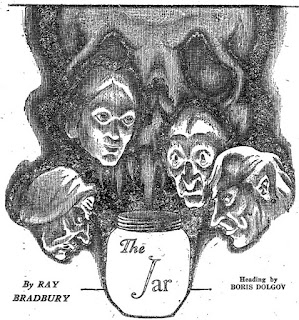 It's a simple short story, involving the purchase of a jar with mysterious, unfathomable contents. Something preserved in formaldehyde, perhaps? No one can be quite sure.

The story remains one of Bradbury's most popular, and it has been anthologised and collected dozens of times over the years. A quick skim of its history at the Internet Speculative Fiction Database indicates about 74 appearances! Nowadays you can find it in two of Ray's books: The October Country and The Stories of Ray Bradbury.

And, of course, "The Jar" is a perennial favourite in adaptation. It was adapted magnificently for The Alfred Hitchcock Hour, in a version directed by Norman Lloyd; re-adapted (badly) for the 1980s revival of Alfred Hitchcock Presents, where it was directed by Tim Burton; and adapted again (competently) for The Ray Bradbury Theater, with a script by Bradbury himself. It's also been done for radio and occasionally for the stage. 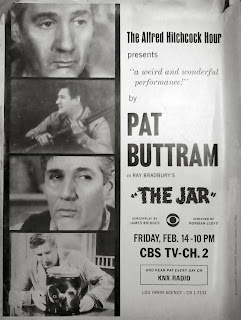 You can read my reviews of the various TV versions here:

The actual jar from the original Hitchcock version survives to this day. For decades Ray Bradbury had it in his basement office, and after he died it was gifted to the Center for Ray Bradbury Studies in Indianapolis. The waters within the jar are even murkier now than they were back in the 1960s when the episode was filmed, but you still get a sense that there's something in there looking out at you... 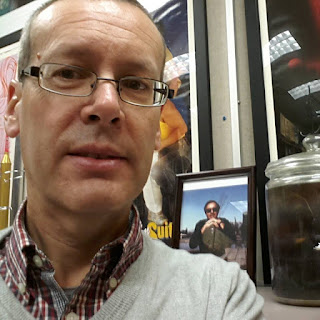 Email ThisBlogThis!Share to TwitterShare to FacebookShare to Pinterest
Labels: The Jar, Weird Tales