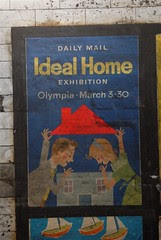 On a related note - stay with me! - I was amazed to see some recently discovered 1950s posters, which have been found undisturbed in their original context. Part of a London Underground station, Notting Hill Gate, has been closed to the public since the 1950s - and yet advertising posters from the era have miraculously survived intact and undisturbed for fifty years or more. You can see these fascinating images on mikeyashworth's Flickr page.
Posted by Phil at 9:00 am