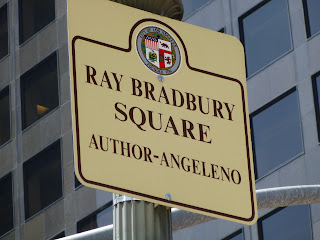 I'm pleased to announce that I have been invited to join the advisory board for The Ray Bradbury Read, an event scheduled for Ray's birthday, 22nd August. It will take place in Maguire Gardens, adjacent to Ray's beloved Los Angeles Library, and Ray Bradbury Square - the intersection named in Ray's honour in 2012.

Full details of the event can be found on Steven's blog, here: