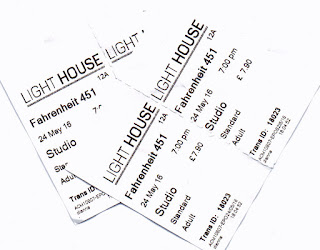 Later this year, I have another Fahrenheit 451 project going public: the special issue of The New Ray Bradbury Review which I have been editing. This contains a number of articles considering the representation of books and texts in the film, some that consider the reception of the film by contemporary and modern audiences, and my own article on Ray Bradbury's responses to Truffaut's film. The issue is due out in October, but is available for pre-order now.
Posted by Phil at 8:45 am

I'm not a fan of the director's film criticism (where he trashed virtually a whole generation of revered film-makers) and most of his films leave me cold and seem impersonal, though some of his films, to me, were an important element in carrying on the legacy of Welle's break with the brilliant Classical Hollywood Style. That said, he made two films that stood out for me, 'Day for Night', which won the Best Foreign Film award. And his adaptation of Ray Bradbury's celebrated work.

There are so many good things in the film that it becomes a semi-classic despite the misjudged choices of the director. First, it has the look and feel of the Hitchcock of the period, whom the director had interviewed extensively during the period in question. 'Marnie' and 'The Birds' come to mind. It is as if he were channelling the 'Master of Suspense'.

The look of the film, with Roeg's cinematography is superb and the feel of it with the heart that Herrmann provides in his score. Then there are the performances, which work and the scene-staling of Cyril Cusack.

I don't think they'll come anywhere close for generations, to the richness of the film, possibly because the film-makers have been dumbed down by the very media that the film warns against.