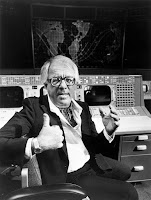 Hello Mr. Nichols, I am a student and I am writing an end of year research paper on Ray Bradbury's A Sound of Thunder. I found your extensive website on Bradbury and I was hoping you might have a blog post of two on the subject. As this work is more obscure, I have had difficulty finding anything scholarly on the subject, and you seem to be well-versed in his works. If you could help, that would be amazing!
Thanks so much,
Chloe Tibbits

I have blogged about "A Sound of Thunder" a few times. Try this link: https://bradburymedia.blogspot.com/search?q=sound+of+thunder

I also reviewed the RAY BRADBURY THEATER adaptation of the story, here: http://www.bradburymedia.co.uk/rbt/24thunder/sound_thunder.htm

I hope these help!

This is very helpful, thank you so much!