As I have mentioned before, the British Library is hosting an exhibition on science fiction, and this event has attracted a bit of media coverage. One of the better pieces is on the BBC website: a discussion of the predictive elements of some SF, which moves on to other functions and values of the genre.

Bradbury is cited because of the once fanciful elements of Fahrenheit 451 which have now come uncannily to life. Plenty of other writers are discussed as well, and there are brief interviews and quotes from China Mieville and other. The full article is here.
Posted by Phil at 9:00 am No comments:

EXCLUSIVE: The Martian Chronicles from Colonial

On June 7th, Colonial Radio Theatre releases its latest Ray Bradbury production: a full cast dramatisation of The Martian Chronicles. Colonial has a great track record of adapting Bradbury, with their award-winning productions of Dandelion Wine, Something Wicked This Way Comes and The Halloween Tree. This one, though, is probably the most complex of them all: Bradbury's book is neither novel nor short-story collection, but something in between the two. This makes for some difficulty for the would-be adaptor, and it's a difficulty that has proven insuperable for Hollywood.

Colonial has one great advantage: radio is the theatre of the mind, and can create visions that Hollywood can only dream of.

I have had the privilege of a preview copy of the entire production, and so here is my review of this remarkable new adaptation.

Fancy a vacation in sunny Palm Springs? Want to live like the literati?

What could be better than a stay at the former second home of internationally renowned writer of speculative fiction, Ray Bradbury?

This may sound like a piece of fiction, but strangely enough Bradbury's old Palm Springs home is now being offered as a holiday let. Full details - including the daily and weekly rates -can be found on TripAdvisor.

I went to Palm Springs once (but not to Bradbury's house). It was one of the few places I've visited that it felt dangerous to stand in direct sunlight, as I could feel my skin begin to fry.
Posted by Phil at 4:08 pm No comments:

The Science Fiction and Fantasy Writers of America have announced the winners of the Nebula Awards. Among the worthy winners are the following:

Best short story: a tie between "Ponies" by Kij Johnson and "How Interesting: a Tiny Man" by Harlan Ellison.

Full details are here.
Posted by Phil at 8:24 am No comments:

The Guardian recently published a feature in which leading figures in modern science fiction nominate favourite works from the genre. It's more than just a list: each contributor has written a short essay on their chosen work. Among the leading figures are Ursula LeGuin, Brian Aldiss, William Gibson, Margaret Atwood, Michael Moorcock and John Clute.

Among other interesting choices are both Gibson and Moorcock nominating Alfred Bester's The Stars My Destination, one of the classics of the 1950s era. I'm not sure that Bester is too well known today, but this novel and The Demolished Man are among my favourites. I also have a soft spot for The Rat Race, a non-SF Bester novel set against a background of 1950s television production.

The Guardian article was prompted by a new exhibition at the British Library. Read the article here and read more about the exhibition here.
Posted by Phil at 9:00 am No comments: Publication information has started to appear for Becoming Ray Bradbury, the new book from Jon Eller which I first discussed back in 2009. It's a literary biography, focusing on the factors that influenced Bradbury's development as a writer.

The publisher's web page for the book is here, and it can be pre-ordered from Amazon here.

A bit closer to the release date, I will publish a detailed review of the book. Watch this space!
Posted by Phil at 9:00 am No comments:

As a follow-up to the successful graphic novel adaptation of Fahrenheit 451, Bradbury has authorised new graphic versions of two other books. The Martian Chronicles and Something Wicked This Way Comes are both due out in the middle of 2011 (as I reported back in December).

Publishers' Weekly has published previews of several pages from each volume. Click here to view them.

I'm not entirely sure I care for the visual style of these adaptations, but I will reserve judgment until I've seen the complete volumes.
Posted by Phil at 9:00 am No comments:

Email ThisBlogThis!Share to TwitterShare to FacebookShare to Pinterest
Labels: graphic novel, Something Wicked This Way Comes, The Martian Chronicles

One of Bradbury's favourite declarations is "Live forever!" - supposedly what Mr Electrico said to him at a carnival in his childhood, and ever since part of his philosophy of life. Ray features in a new documentary, How to Live Forever, alongside other famous nonagenarians. Here's a review.

Judging by the trailer, Ray is a young slip of a lad compared to some of the other folks featured in the movie. The film is released on 13 May. More information on the movie's official website.
Posted by Phil at 2:42 pm No comments:

Email ThisBlogThis!Share to TwitterShare to FacebookShare to Pinterest
Labels: Electrico, How to Live Forever 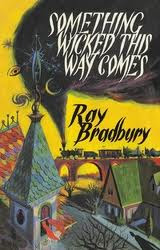 This post should be tagged with "now how did I miss that?" Back in October of last year, Forces of Geek published a two-part article on Something Wicked This Way Comes. It's a well constructed piece of work, with a fine level of detail on the production history of Something Wicked as both novel and film.

The book started out as a short story - "The Black Ferris" - and later became (in this order) a film treatment, a novel, a screenplay, and a stage play. Quite a journey.

What is particularly good about the Forces of Geek article is that it includes a short comparison of novel and screenplay. Read all about it here.
Posted by Phil at 9:00 am No comments: 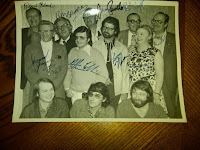 Photo courtesy Richard Kaminsky. Click to enlarge.
Posted by Phil at 9:00 am 2 comments: