To Fairyland By Rocket 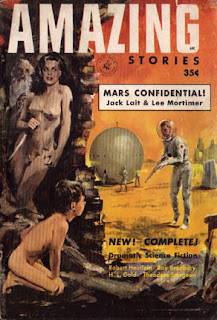 Eric Rabkin once wrote an essay on Bradbury called "To Fairyland By Rocket". In that title alone, Rabkin encapsulates something fundamental about Bradbury's writing: the collision or co-existence of fantasy and science fiction.

Bradbury is quite clear on what he considers to be science fiction. Fahrenheit 451, he tells us, is SF precisely because it is possible. It is a warning about the future, extrapolating from the technologies and the culture prevalent at the time of writing the novel.

The Martian Chronicles, on the other hand, is in Bradbury's view pure fantasy. The reason? It is impossible. No way it could ever happen. Yes, it has allegorical properties, and in its re-casting of the American experience of the frontier it unveils some profound truths. But it isn't an extrapolation of a possible future, merely a fanciful presentation of a world that never was.

It is The Martian Chronicles above all which gives Rabkin the fuel for his discussion of how Bradbury uses off-the-shelf imagery from SF and places it in a world - all crystal pillars, masks and flame birds - which is straight out of a fairy story.

Another story which I have always considered to be part of this approach is "Here There Be Tygers", about an expedition to a planet which turns out to be a paradise that seems to grant any wish. Bradbury doesn't refer to wishes, instead presenting the story in terms of a planet that can somehow read thought, but a wish-fulfilment fantasy is what is at the heart of the story.

The "fairyland by rocket" aspect of the story is captured neatly in the artwork accompanying the story when it was reprinted in Amazing Stories in April-May 1953. The illustration by Tom O'Sullivan (below - click on image to enlarge) captures a facnciful moment of flight - probably the most memorable sequence of the story - while in the background is the standard 1950s SF rocket. 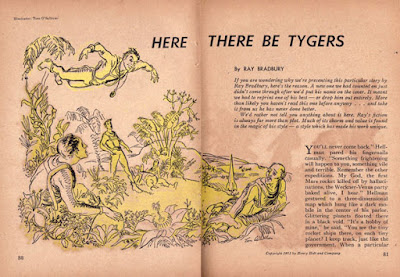 (The amusing blurb in the magazine more or less apologises for re-printing a story, which was due to the expected new Bradbury story not arriving in time.)

"Here There Be Tygers" was first published in an anthology called New Tales of Space and Time in 1951. It was later collected in two Bradbury volumes: R is for Rocket and the UK Day it Rained Forever. 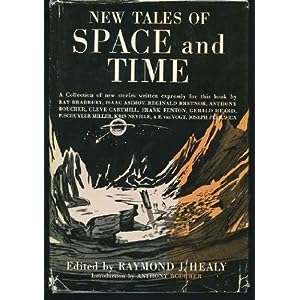 Email ThisBlogThis!Share to TwitterShare to FacebookShare to Pinterest
Labels: Amazing Stories, Here There Be Tygers, magazines, New Tales of Space and Time, R is for Rocket, The Day It Rained Forever