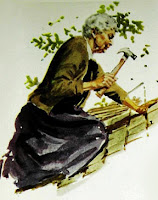 Ray Bradbury has on more than occasion written about old ladies and their encounters with death. Sometimes he does it with humour, and sometimes with a serious tone. But always it is with a strong old lady, who is able to confront death and sometimes tell it who's boss.

A serious but quirky treatment is given in "Good-by Grandma", a short story first published in the Saturday Evening Post on 25 May 1957, and shortly afterwards incorporated into the novel Dandelion Wine. The Post version of the story was accompanied by Peter Stevens' paintings of the magnificently active grandmother (left).

This old lady passes away when she wants to. Bradbury treats her death not so much as an end as a return, a picking up of a thread:

A long time back, she thought, I dreamed a dream, and was enjoying it so much, when someone wakened me, and that was the day when I was born. And now? Now, let me see. She cast her mind back. Where was I? she thought.

In the earlier short story "There Was An Old Woman", first published in Weird Tales in July 1944, Bradbury gives us an old lady who resists death with all her might. It's not so much that she is scared of it; more a case of not having time for such nonsense:

"Why, it's just silly that people live a couple years and then are dropped like a wet seed in a hole and nothing sprouts but a smell. What good do they do that way? They lay there a million years, doing no good for nobody. Most of 'em fine, nice and neat people, or at least trying." 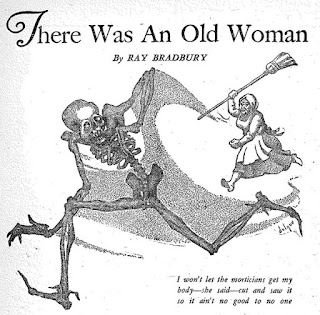 This story was illustrated by Boris Dolgov, who shows death as a cowed skeleton, chased off by Aunt Tildy. The story was collected in Bradbury's books Dark Carnival, The October Country and The Stories of Ray Bradbury. Bradbury also adapted it for The Ray Bradbury Theater.

A third classic Bradbury meeting between death and an old lady is "Death and the Maiden", which first appeared in Fantasy and Science Fiction in March 1960, and later collected in The Machineries of Joy and Bradbury Stories.

This old lady, the 91-year-old Mam, is a bit like Aunt Tildy in her opposition to death:


“I see you. Death.” would cry Old Mam. “In the shape of a scissors-grinder! But the door is triple-locked and double-barred. I got flypaper on the cracks, tape on the keyholes, dust mops up the chimney, cobwebs in the shutters, and the electricity cut off so you can’t slide in with the juice! No telephones so you can call me to my doom at three in the dark morning. And I got my ears stuffed with cotton so I can’t hear your reply to what I say now. So, Death, get away!”

But this time death is more subtle. It comes not as a skeleton but as a handsome young man, who brings Mam the promise of re-experiencing the freedom she hasn't allowed herself since the age of eighteen. She finally comes to believe in the man, and accepts the trade he offers. After years of living alone, locked away from the world and the risk of death, Old Mam steps out:


And they ran down the path out of sight, leaving dust on the air and leaving the front door of the house wide and the shutters open and the windows up so the light of the sun could flash in with the birds come to build nests, raise families, and so petals of lovely summer flowers could blow like bridal showers through the long halls in a carpet and into the rooms and over the empty-but-waiting bed. And summer, with the breeze, changed the air in all the great spaces of the house so it smelled like the Beginning or the first hour after the Beginning, when the world was new and nothing would ever change and no one would ever grow old.

Bradbury took the title of this story from an old legend, one which has inspired generations of artists. Read about the history of "death and the maiden" here.
Posted by Phil at 8:00 am

Email ThisBlogThis!Share to TwitterShare to FacebookShare to Pinterest
Labels: Dandelion Wine, Dark Carnival, Death and the Maiden, Good-by Grandma, Machineries of Joy, Ray Bradbury Theatre, There Was An Old Woman