What Kind Of Writer?

While I'm not sure that the title is terribly appropriate, Steve Almond's recent article "Why Ray Bradbury Was Ahead Of His Time" for the Boston Globe shows some good insight into what makes some of Bradbury's science-fiction stories tick. Steve Balshaw, writing for Mancunian Matters, reminds us that Bradbury wasn't just a writer of science-fiction, but arrives at some similar conclusions.

While I like both of these articles, they both reflect on the familiar "classic period" of Bradbury, and fail to even acknowledge anything he wrote after 1962. Still, it's good to see that there are plenty of intelligent readings of the familiar works out there.

Bryce Wilson, writing for New Times doesn't go so deeply into the individual stories, but does grapple with the most appropriate way to characterise Bradbury as a writer. He suggests "Midwestern surrealist" might be an appropriate term, or at least a term that is as good as any.
Posted by Phil at 8:00 am No comments:

Gene Beley, the author of the unauthorised biography entitled Ray Bradbury Uncensored!  wrote a remembrance of Ray recently. Gene recounts how he first spoke to Ray, after he posted an ad in a Waukegan newspaper asking "Ray Bradbury, where is your past?" The full article is online here.

Gene's previous writings on Bradbury include this report (with photos) on Ray's 2009 birthday party.

Ray Bradbury Uncensored! is available from iUniverse and various online bookstores.
Posted by Phil at 8:37 am No comments:

As the headline says: the tributes continue. Comic-Con took place last week, and featured a well attended tribute panel which included Margaret Atwood, Sam Weller, Marc Scott Zicree and others. There are plenty of accounts of this panel on the web, such as this one.

Zicree talks more about Bradbury in this BBC radio interview.

Fans in Pittsburgh staged their own tribute by reading Bradbury stories.

Other tributes inevitably come wrapped up in reviews of the new tribute volume Shadow Show.

Gloria McMillan of Arizona University has put out a call for papers inviting scholars to contribute to a proposed book with the working title The Tucson Bradbury Chronicles: Mars is The West. This essay volume will take as its starting point the fact that the young Ray Bradbury lived for a while in Arizona, but will explore Bradbury's engagement with the western US in broad terms. Such academic volumes are often a long time in development, so it may be some time before anything comes of this, but I will post more information when it becomes available.

First Things, a publication and website of The Institute on Religion and Public Life, has published a thoughtful article on Ray Bradbury's short story "The Pedestrian". John Wilson writes about the text itself, and explores the commentary on the text put forward in Jon Eller's Becoming Ray Bradbury.  Wilson tries to answer the question "Why didn't Ray Bradbury drive?" After considering biographical and psychological factors he concludes quite simply: "Why didn’t Ray Bradbury drive? Because he was Ray Bradbury." Read the full article here.

Bradbury's "The Pedestrian" was first published in the now defunct magazine The Reporter in August 1951, and subsequently collected in his books The Golden Apples of the Sun, Twice 22, S is for Space, Bradbury Stories: 100 of His Most Celebrated Tales and A Pleasure to Burn. This makes it one of his most reprinted tales - and it has had an even more extensive life in anthologies and magazine reprints.

The complete archive of The Reporter is available online, and so we can view Bradbury's story in its original publication context here.
Posted by Phil at 10:23 pm No comments:

Email ThisBlogThis!Share to TwitterShare to FacebookShare to Pinterest
Labels: The Pedestrian, The Reporter

Shadow Show, the short story anthology in honour of Ray Bradbury is now out. I have a copy, but haven't had time to read it properly yet, just dip in here and there. Eventually I will get round to reviewing it. Meanwhile, there are other reviews out there to help you decide whether it is for you. This one from Ryan Britt at Tor.com gives a good overview from someone who has actually read it. The book was never intended to be a memorial to Bradbury, having been planned for months or years prior to Ray's recent death - but it looks as if it will serve as timely commemoration of the man and his writing. Those who don't know the history of the volume might be surprised to see that there is an introduction by Bradbury himself.

Journalist and political commentator Paul Street has written a long article relating Bradbury's Fahrenheit 451 to our modern world. Much of what he writes is familiar: Bradbury's apparent prescience in his use of immersive TV systems, loss of literacy and increasing personal isolation through (for example) personal earphones. However, he makes a number of less familiar extrapolations, and manages to link in Facebook and other "evils" of the modern world. You may not agree with everything he writes, but it's a good piece. Read it here.

The Smithsonian National Postal Museum has put together a little tribute to Ray Bradbury, using postage stamps to illustrate key points in his life and career. It's rather cute, as you can see by clicking here.

It occurred to me that this idea could be taken further, especially if you bring in stamps from other nations that theUS - such as the Soviet Sputnik stamp shown on the left.

Here are some other stamps which should have some resonance for Bradbury aficionados. See if you can work out the Bradbury connections: 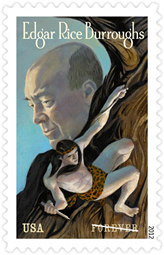 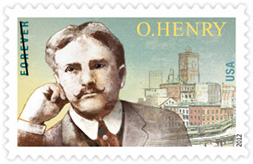 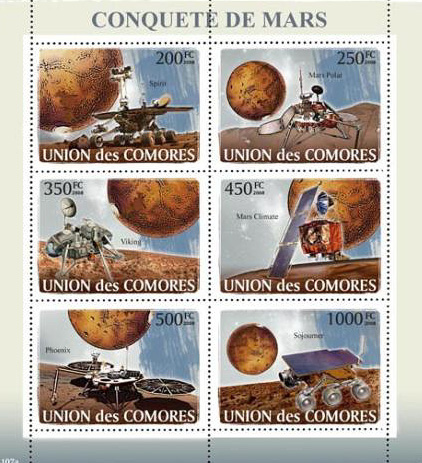 The actual announcement of Bradbury's death was quite low key: a relative tweeted it, but it took a couple of hours for the more  formal news services to pick up on it. Around this time, there wasn't much information being given, so people started casting around. Nothing shows the impact of the man's passing as much as the "hit counter" on this very blog. You can see the day of Bradbury's death quite clearly, as the normal level of traffic is thoroughly dwarfed:

I haven't seen many photos showing Ray Bradbury with Harlan Ellison - but here's one that's come my way. It's from DragonCon 1998, and also shows Ray Harryhausen on the left and Julius Schwartz on the right. 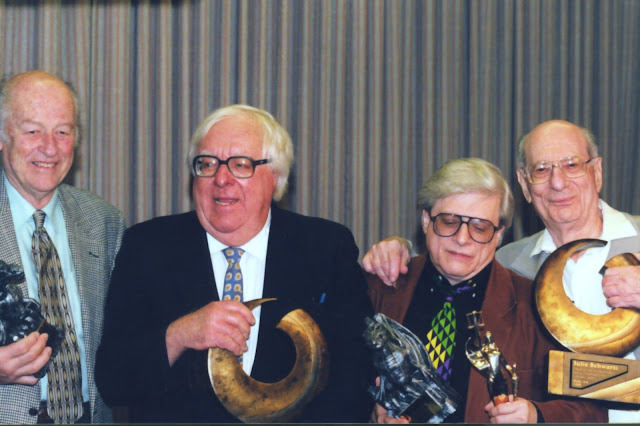 I don't really hold with the idea that science fiction is about predicting the future, and Bradbury's approach to the genre was in any case built upon the tropes he was already familiar with through a lifetime of reading SF.

Having given those caveats, I now give you this link: Ray Bradbury Predictions Fulfilled!
Posted by Phil at 8:00 am No comments: