I recently took a brief trip to Dublin. While I was there I dashed about with a camera trying to grab some pictures of places with a Ray Bradbury connection.

Click on any of these pictures to view larger versions.

It is an oft-told tale that Bradbury stayed in Dublin in 1953-54, when he was writing the screenplay for Moby Dick for director John Huston. This relatively short visit - a mere few months out of Bradbury's nearly 88 years on the planet to date - provided an incredible amount of inspiration. Not only did he complete the screenplay, he left Ireland with material for a number of short plays, short stories, the play (and later novella) Leviathan '99 and eventually the partly autobiographical novel Green Shadows, White Whale.

My first priority in Dublin was to get to O'Connell Bridge. Not only is this the only major bridge in Europe to be wider than it is long, it was the location for Bradbury's finest Irish story, "The Beggar on O'Connell Bridge". First published as "The Beggar on the Dublin Bridge" in the Saturday Evening Post in June 1961, the story is an account of Bradbury's experiences of being accosted by beggars whenever he left his hotel. The story can be found in Bradbury's short story collections The Machineries of Joy and Bradbury Stories. It can also be found, slightly modified, as a chapter in Green Shadows, White Whale - where John Huston strangely takes the place of Bradbury's wife.

For a moment, while we had been talking in the cold rain, the beggar had been silent. Now, as if the weather had freshened him to life, he gave his concertina a great mash. From the folding, unfolding snake box he squeezed a series of asthmatic notes which were no preparation for what followed.

He opened his mouth. He sang.

The sweet clear baritone voice which rang over O'Connell Bridge, steady and sure, was beautifully shaped and controlled, not a quiver, not a flaw, anywhere. The man just opened his mouth, which meant that all kinds of secret doors in his body gave way. He did not sing so much as let his soul free.

When he arrived in Dublin in October 1953, Bradbury stayed in the Royal Hibernian Hotel, which can be seen in this old postcard of Dawson Street. Here is how Sam Weller describes it in The Bradbury Chronicles:

In Dublin, the Bradburys checked into the old yet opulent Royal Hibernian Hotel on Dawson Street and were given two rooms. Ray and Maggie's room - number 77 - had a fireplace, and in this room Ray would do much of his work on the screenplay. Regina [the Bradburys' nanny]and the girls were placed in a separate room, with a coin-operated heater into which Regina continually fed money to keep the room warm. 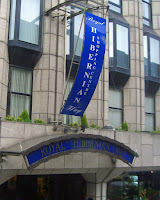 Not far from the Royal Hibernian site is St Stephen's Green, a park where Bradbury would occasionally take his children for a walk. This gets several mentions in Green Shadows, White Whale as the narrator desperately tries to solve the mystery of the beggar-woman:

God, how that woman could race.
She put a block between her backside and me while I gathered breath to yell: "Stop, thief!"
It seemed an appropriate yell. The baby was a mystery I wished to solve. And there she vaulted off with it, a wild thief.
So I dashed after, crying. "Stop! Help! You there!"
She kept a hundred yards between us for the first half mile, up over bridges across the Liffey and finally up Grafton Street, where I jogged into St. Stephen's Green, to find it ... empty.
She had absolutely vanished.
Unless, of course, I thought, turning in all directions, letting my gaze idle, it's into The Four Provinces pub she's gone . . . 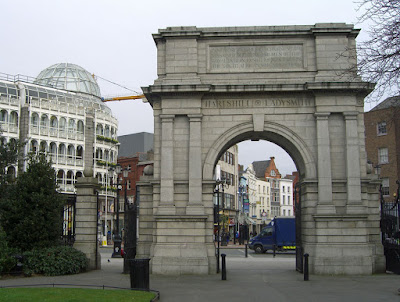 The entrance to the park closest to Grafton Street is Fusilier's Arch, a memorial erected after the Boer War. In this photo, the arch is flanked by the St Stephen's Green Shopping Centre. Although constructed in the 1980s, this Centre looks rather Victorian with its conservatory-style domed glass roof, which was suposedly design to complement the architecture of the Gaiety Theatre opposite. (After Ray's family left for Italy in 1954, he attended the ballet season at the Gaeity.)

Speaking of theatres, legend has it that on Bradbury's first day in Dublin he saw a newspaper ad which said "Laurel & Hardy - Live - For One Night Only". He promptly dashed down to the Olympia Theatre and bought the last remaining ticket. The Olympia still stands in the Temple Bar area of Dublin, and remains a popular venue for drama, comedy and music. 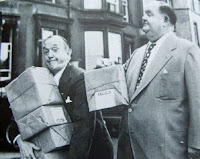 If the legend is accurate, Ray must have arrived in Dublin on Sunday 11 October 1953, as it was on that night that Stan and Ollie had decided to give a single charity performance of a show they had been preparing for touring in Belfast and London. The picture here shows them outside the Royal Marine Hotel where they stayed throughout their time in the city. A detailed account of Laurel and Hardy in Dublin can be found in this programme for a recent Sons of the Desert convention. 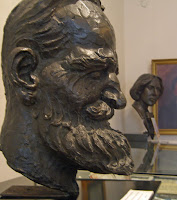 It's impossible to be in Dublin without noticing the references to the great literary figures all around, in statues, museums, public art. You can find out more than you would ever want to know at the fascinating (but small) Writer's Museum where you will find this fellow, hero of Ray Bradbury and immortalised in the story "GBS - Mark V" (1976).

Oh, and the wee fellow in the background? That's Oscar Wilde! 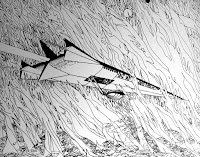 Apart from Shaw, Bradbury was also greatly influenced by another Dublin writer, W.B.Yeats. It is Yeats, of course, who provided Bradbury with the title for his short story "The Golden Apples of the Sun." Joe Mugnaini's line art for this story is shown here.

Once again, Phil, your commentary and photos are informative and intriguing. I love Dublin and Bradbury, so I was saddened to learn that the Royal Hibernian Hotel no longer exists. I thought that it was still around (maybe I just dreamed it).

I don't know if I can post this comment (still having trouble with your visual ID) but I'll try.

BTW, I can't believe that I'm the lone poster on your site. Genevieve on Mars?! I wonder if she has a library card for the first library on Mars?


To which I reply:

good to hear from you again, and thanks for visiting my site. For some reason, very few people obther leaving comments. They seem to prefer emailing me directly, probably because posting a comment is a bit confusing if your not used to Blogger's system. I will make sure your comment goes on for all to see.

The Royal Hib most certainly doesn't exist any more. Except in Bradbury's stories, where it will live forever!

There is another Hibernian, Wyngate Hibernian in Dublin that I mistook for the Royal Hibernian.

I found this link online to a photo of the demolition of The Royal Hibernian in 1991.

Thanks, L. I scoured the web or Royal Hib photos and didn't come up with much. That image is a good one, and (sadly) completes the story of the Hotel.

Of course, I have no actual personal knowledge or connection with the hotel, but Bradbury made such good use of it in his fiction that it seems real.

I enjoyed reading your blog on "Papa Ray". He still enjoys telling his Irish tales when we visit him.

My husband and I are currently producing Ray's play FALLING UPWARD in Alabama. I have enjoyed researching the locations mentioned in the play and trying to add a touch of authentic Ireland to the set.

thanks for commenting. Yes, I am aware of Pillar Of Fire's good works in Alabama - I follow you from a distance via Facebook. Maybe one day I'll get to actually see one of your productions, but for now the odd movie clip on Youtube will have to suffice!

Nice article. I'm off to Dublin for a few days. I'll make a point of visiting these places with Bradbury links.