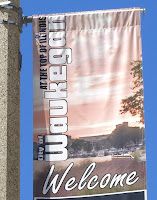 In the same US trip, I also visited the Center for Ray Bradbury Studies for the first time. I will blog about this soon.
Posted by Phil at 6:00 pm

I'm so glad I googled Ray Bradbury's house and found this. I enjoyed your map and pictures.

I'm from Waukegan and looke dup many of the smae things you did, I used to go down into the ravine as a child.
Where I used tolive there were some actualy bricka streets wiht trolley tracks in them, but they were coverd before we moved in 1960.

Hi!
I really enjoyed to see the photos you took in Waukegan! Especially the Carnegie pictures. I'd love to go to Green Town myself some day..

Can't believe I haven't come across your blog before! Having grown up near Waukegan, and loving Bradbury stories, I still find it amazing that people come here to visit Green Town. I still live here and still re-read the Bradbury stories. Thanks for taking the time to match the places on the map. I also personally knew THE Helen, cousin of Ray Bradbury whose name I think he used.

It's always great to hear from Waukegan folks, so thanks for your kind comments. I understand Green Town received a large part of Ray's book collection in the last few months. As I write this, I am visiting Indianapolis - where I am looking at Ray's manuscripts, which were gifted to the Center for Ray Bradbury Studies here at Indiana University.

Hi, I noticed your photos are no longer available at the link provided. Could you please repost? Thanks!

Hi, I noticed the link to your photos no longer works. Can you please update? Would love to see them. I am a native of Waukegan but haven't been there in a long time. I did have the pleasure of going on a walking tour with Mr. Bradbury. I told him my daycare was next door to his childhood home (it was). I am trying to recall if we dedicated the park while he visited the school, or if the ravine is next to the school.

Thanks for alerting me to the missing photos. I'll reinstate them - but it may take a while for me to get round to it!