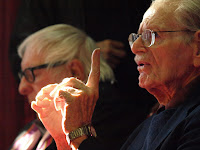 Corwin was originally intended to direct Bradbury's radio play Leviathan '99, which became Bradbury's first work for the BBC. As it turned out, Corwin didn't get to do the job, but decades later he was able to participate in a new radio version of the story, when Bradbury's novella version of Leviathan '99 was dramatised for radio in LA.
Posted by Phil at 11:11 am