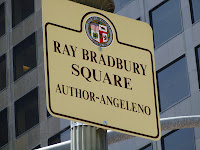 Exactly one year ago Ray Bradbury passed away.

Although gone, he has been anything but forgotten. In the year since his death there has been a square named after him in Los Angeles, right next to the city's library; a tribute panel at the Science Fiction Research Association conference in Detroit; tribute books from Steven Paul Leiva and William F. Nolan; a 60th anniversary special edition of Fahrenheit 451 from Simon & Shuster; and, forthcoming, new studies by William Touponce and Jonathan Eller, and the second volume of the Collected Stories Critical Edition.

Not to mention special tribute editions of Rosebud magazine and Famous Monsters.

Email ThisBlogThis!Share to TwitterShare to FacebookShare to Pinterest
Labels: tributes