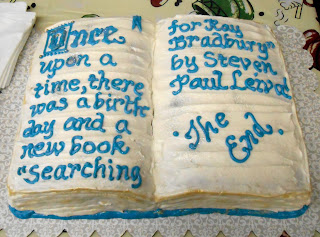 I'm rather late in posting this, but Bradburymedia has suffered while I've been busy in recent weeks...

At the end of May, Steven Leiva celebrated two things: his own birthday, and the launch of his book of writings about Bradbury, Searching for Ray Bradbury. I still need to get round to writing a review of the book, but for now I'll just say that it's a convenient gathering together of Steven's articles which have appeared in a range of publications over the last few years.

Steven Leiva took a leaf out of Bradbury's book (so to speak) by choosing to celebrate his birthday in Glendale's Mystery and Imagination bookshop. Photos and an account of the event are on Steven's blog, here.
Posted by Phil at 6:00 am